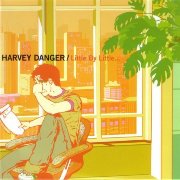 At first listen, Little by Little… was a bit unnerving. The first proper Harvey Danger LP in nearly five years, it has lots of piano instead of electric guitar. The songs are mostly much lighter and less rockin'. Was singer Sean Nelson prophetic about his own band's trajectory when he sang, in 2000, "I bowed before the avatar, he said the problem's clear to me: you never got over Morrissey?"

With further listens, I realized that it wasn't the band's problem if the record wasn't what I expected or hoped for. It was mine. There's much to admire on the release; Little by Little… deals with complex issues like politics, religion, and relationships on an intelligent level that's both challenging and accessible.

The album kicks off with "Wine, Women, and Song," a song imaginarily praised when it was in demo form on the last HD release, the Sometimes You Have to Work on Christmas (Sometimes) EP. That previously-released version sounds flat compared to the final product, thanks to production from John Goodmanson, who turns up the pianos and downplays the harmony a little more, making for a song that could easily become a lounge standard — and yes, this is a compliment. It's a song in the tradition of Brian Wilson, one which successfully captures the emotions of heartbreak yet sounds both upbeat and sincere.

Next up is "Cream and Bastards Rise," the only pure rock and roll song on the album, and the one that mostly resembles the best songs on HD's last album, 2000's King James Version. Of the remaining songs, "Moral Centralia," "What You Live By," and War Buddies" are likewise strong tracks. From the opening verse of "Moral Centralia," it's obvious the song deals with the moral ambiguities of a relationship (just as the small town of Centralia lies ambiguously between the big cities of Seattle and Portland?). "You were weak and I was strong / I did nothing to lead you on, she said," Nelson sings on the chorus with an inflated sense of chutzpah, but also with a sense of vulnerability. Each verse takes a different perspective in the relationship, as though the chorus is arguing he said/she said with the verse, in hindsight.

"What You Live By" is a Seattle Song in the same sense that some of the films of Martin Scorsese (particularly Taxi Driver and Mean Streets) were New York Movies. The track captures an element of the city that will not show up on any travel brochures: specifically, trashy Aurora Avenue. The characters are tortured and conflicted individuals, not cut-and-dry heroes and villains. The opening verse deserves to be quoted at length:

"Meet me up on 99, beneath the Marco Polo sign
I'll be the one with the box of wine and the $100 car.
We can talk about the lives we've led
And count the reasons we're not dead."

"War Buddies" succeeds as an anti-Bush protest where Bright Eyes' "When the President Talks to God" leaves off. The latter sounds like a vitriolic lecture from a self-righteous 26-year-old (which, of course, it is). "War Buddies" begins like a love song and subtly devolves into one of the most cynical songs you're likely to hear all year. One particular verse, Nelson sings, "Let's be friendly fire / Body counts mounting on a bed of barbed wire." If "Wine, Women and Song" sounds Brian Wilson-esque (and it does), "War Buddies," with a message that's easy to miss among the soft harmonies, reminds one of Randy Newman.

This album is celebrating a return to the new release bins with its move into the Kill Rock Stars family. Like the original release, the new KRS version will include a 9-track bonus CD and the band is still offering the LP free as a download on its website. The added bonus this time around is the album will have a slightly different tracklisting and song order, and new packaging!