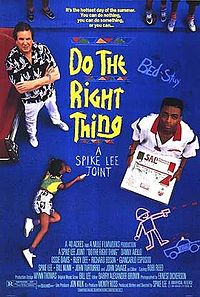 Havana to show 'Do The Right Thing' tonight

Now, chances are, if you don’t like Spike Lee, you probably still either like this movie because it’s fun and meaningful, colorful and musical. BUT you should know that with the showing of Lee’s bio-doc Passing Strange this past SIFF (2009) a lot of people are realizing just how underrated a filmmaker Lee really is. He stuffs so many humanist ideas and details of various milieus into his movies, when he is at his best they are worth watching over and over again. Do The Right Thing is still one of his best. And a party atmosphere in the parking lot of Capitol Hill club Havana on August 5th sounds like the best place to catch that flick. Here’s the PR, and about upcoming movies at Havana:

HAVANA LAUNCHES SUMMER MOVIE NITE SERIES, PARTNERS WITH VIA TRIBUNALI FOR DO THE RIGHT THING

Seattle, WA, August, 2009 — On the heels of a now-historic Seattle heat wave, Capitol Hill nightspot HAVANA will launch its annual outdoor Summer Movie Nite series this Wednesday, August 5, with a showing of Spike Lee’s classic Do The Right Thing.

Local Neapolitan pizzeria VIA TRIBUNALI will be on hand for the screening, cooking up their signature wood-fired pies. The mobile oven, constructed by a team of Italian craftsmen, is kept at 1000 degrees Fahrenheit, to ensure a truly authentic experience.

“It’s become a summer tradition on the Hill,” said Havana owner Quentin Ertel. Summer Movie Nite is now in its third year, and takes place in the parking lot leading to the club. “We take over the entire lot, show movies on the giant wall, and drink under the stars.”

This year marks the 20th anniversary of Do The Right Thing, and Havana is the only outdoor venue in Seattle licensed to screen it this summer. In deference to Da Mayor, 16 oz. Miller High Life tall boys will be on special.

Moviegoers will be able to drink and dine outside, and a full bar is available.

Doors open at 8:00 pm, and movies begin at 9:30. Admission is $5, and attendees must be 21+ with valid ID. There is ample seating available, and patrons are encouraged to bring a blanket and sprawl out.

“It’s one of the best ways to have dinner and a movie,” said Kerri Harrop, of Via Tribunali. “A warm summer night, delicious pizza, cold beer, and a classic film – what’s not to like?” Weather permitting, Havana Movie Nite will run every Wednesday in August.

The film schedule includes cult classic The Warriors, the epic George Foreman vs. Muhammad Ali Rumble in The Jungle of When We Were Kings, and John Frankenheimer’s Grand Prix.

Also featured on this summer’s schedule is the Northwest premier of Captured, Ben Solomon’s gritty documentary on photographer Clayton Patterson. Since 1979, Patterson has dedicated his life to documenting the final era of raw creativity and lawlessness in New York City’s Lower East Side.