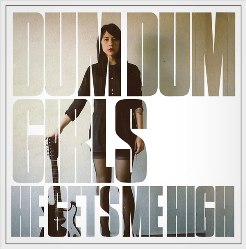 He Gets Me High

Kristin “Dee Dee” Gundred and her in-shades art-babes are at the #2 spot in the current Billboard charts for this EP for a rare but giddy reason: a quick-change, yet supremely matured, transitional moment between full-lengths — sounding bold and elegant after dense, terse debut I Will Be. And, telling from the three intoxicating originals and firm-shouldered cover of a Smiths classic, what I think will probably end up being one of the very best albums of 2011: Coming up next.

Since she left Rilo Kiley-mentored Grand Ole Party in the indie rock band glut of the past decade, Gundred has put on the paint-spattered motorcycle jacket and had quite a gas-choked rip around the music scene since. Probably figuring out that with her easy skills and fuzz-rock finesse she could dominate the rest with ease, her one-time one-gal band Dum Dum Girls first gladdened synthetical seven inch collectors with a smattering of singles and buzz. Then getting Link Wray/Blondie/Strangeloves band-baron Richard Gottehrer to help out with I Will Be, the latter must be thrilled to help produce an EP that is as bold a mini-/between album statement as fully fleshed out and dapper as He Gets Me High. I was there for the beautifully fat Gang of Four’s Gold EP, for the absolutely assured one between the first two Pretenders albums; these were albums that took the magical mix of discovery and danger of their first records and went deep groove audacious in the post-punk era, perhaps proving that rock and roll really is an Extended Play medium. (Buy me a whiskey and we can argue those details.)

He Gets Me High is just that great, too, a giant leap forward onto the dance floor and into the after party, where the the bliss of opener “Wrong Feels Right” somehow blends early rockabilly Blondie with later “Dreaming” swankiness, and then pigging out on wicked romance with the title track (a “fix me up” anthem the Bangles would have walked like a whatever for). The apex of the cycle is the deeply concerned “Take Care Of My Baby,” where the nurturing protagonist broods over her self-destructive Johnny Boyfriend like a classic Ronnie Spector ghetto handmaid. It’s startling and steamy, and all of these songs exude the rebellion of late 50s girls gone rawk attitude with a whole lot of 60s stoner pop freak beat.

So why end ambitiously on a “take this!” straight-ahead cover of “There Is A Light That Never Goes Out,” a Morrissey/Marr signature tune that even many Smiths fans can’t resist? Because it sounds like the straight world about to crash into the counter-culture; a teenage melodrama built on William Blake’s “London,” where the emptiness of life has to burn out even if all over the concrete — it’s perfect for a modern Anglophile girl group to make its own. And Dee Dee, with her eager vocals jumping all over the minimalist drums, well… she and her gang almost punctures a sparkling leash through its mighty snout. Pretty bold, and about to blow up.