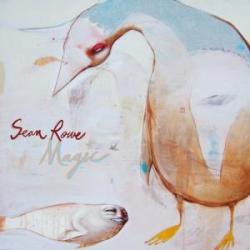 When my wife heard this playing yet again on the stereo last night she chirped, “So you found a record you really like a lot? That’s awesome!” Yes, Sean Rowe’s brandy-baritone vocals from his ANTI- debut Magic have become as sonically ubiquitous in our apartment as, say, those by Dylan, Cohen, and most recently Van Morrison. Now, that’s pretty heady praise to write those names in a review of a new artist, and I’d need you to check in with me this time next year to see if Magic is still pouring out through apartment #301 here above the Ave. But the fact that the juxtaposition is even presumed should tell you enough that there is unique promise involved.

Most of the praise I have for this full-length would better be used by the placement of a handful of the tracks on a mix tape to friends. Because it’s a really, really good album — but due to so many slow burners with similar tempos, the sequencing lacks a certain ingenuity. Still, maybe that’s OK: The first of the ten tracks is titled “Surprise,” and it’s a hale, modest, romantic soul number that might have been better placed as the third track. A steady hand full of flowering imagery (“Your body shows up to take it all”)… still, this is where the average consumer is going to look for the quick pop fix, and this is the closest thing to a Steve Winwood number Magic is going to give. (However, deep cut art song fans will love following lines like, “I found a little shelter inside of the sickness … I want to bottle the night and use it on you when the night goes down.”)

There is further proof that new singer-songwriter gods can possibly be born new, or at least their rhythms reborn through the cryptic night poetry and the plainly textured strum and thrum of their dusky song-blankets. It’s when Rowe starts to caterwaul supernaturally halfway through “Old Black Dodge,” like how L. Reed has been using Antony’s otherworldly vocals to augment his more minimal sing-speak. “Wet” may have been a better opener; I can guess what it’s about, but I love how (spartan) it sounds. Pretty much just a couple of acoustic guitar notes, over and over, with confessions about “leaving friends behind the graveyards with jars of rum” razoring out of the song’s almost-stillness. Whether the kitchen knives and abusive boyfriends and moving are metaphorical, it all (as they say) rings true. Just as true as “Fast Car” from Tracy Chapman, and it’s been a long time since alternative-kissed soul-pop has been both this pinching and relaxed.

But it’s when more instruments are used, as on the fluidly-paced full-band masterpiece about the metaphysical car crash we’ll all find ourselves in one day, “Jonathan” — which, by the way, is the song here everyone needs to hear a few times — that I fall in love. The scenes shoot out in sparks of lived-in observation, worn out reserve, and that ever-present musical restraint. “Jonathan” lets go crazily a little bit though, and it’s like hearing “Born To Run” all over again — suicide machines and Catholic girls wrapping their legs around you and votive candles lit in an abandoned building and all that.

The two tracks before “Jonathan” are almost equally as strong; the end of the world as the end of relationship (or vice versa): “Time To Think,” perfect for that final drink before she comes home to dump you, and “Night” brings up a child’s love and death in breaths too sharp to repeat. But it’s where it’s coming from that has me convinced to listen. There are some near-hymnals later on that I lose focus on; but maybe it’s just because these previous jewels gleam so bright. (Maybe the sequencing was smart, after all.) “Wrong Side Of The Bed” is an example that even a fast-paced tune might lack the brilliance of the ballads. Rowe might be a bard like Cohen; weaving a tapestry, not building the bonfire. “American” is genuinely surprising in how deeply inside it reaches, for example, its spiritual thirst defying the simplicity of its title.

It’s been a long time since I wanted to play an album over this much, my wife was right about that. This has been out since February but I think it’s got a bad Catholic girls’ legs, so let them do their work on you if they haven’t. Sean Rowe’s words and voice definitely have the Magic; here’s to him casting future spells on me, and hopefully on you, too.