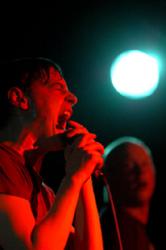 I arrived to my first Vera Project show to a hella-line on a barely post-frigid night. After queueing for 45 minutes outside, I entered the showroom with no expectations beyond warmth. As my freezing body drew comfort from the heat of the all-ages throng around the stage, it was my ears that received the greatest delight when the opening band came crashing onstage. Who the hell are these guys (and girl), I thought?

Turns out they are The Thermals, a Portland-based band who have a new release due out on Sub Pop in March. And oh goddamnit, they were amazing! I heard new wave punk influences, with incredibly catchy hooks, and a driving and amazingly tight rhythm section.

They were also really professional — not in any sort of over-produced or polished way, but rather in their ease with performance, with a commanding stage prescence. Lead singer Hutch Harris has the strongest, most unabashed male vocal I've heard in quite some time. He is a fantastic showman — without being showy, if that makes sense. His eyes roll back in his head when he sings, flails, or madly gestures, but he never postures; his onstage delivery approaches evangelical.

The Thermals sound incredibly earnest, but not like their bill-mates The Walkmen &#151; a band who were also good but so serious about being good that they couldn't just let loose and smile. These guys are serious musicians but they play with unbelievable energy and passion, and look like they're having a blast while doing it — a rare combination.

If they set the film Valley Girl in 2003, The Thermals would be on the soundtrack, and Nicholas Cage would still be cute. Did I mention cute? They have the hottest quirky girl on bass (Kathy Foster), and Hutch is as much a swooner as a crooner. I might lose 6.2 points on my indie-cred scale for saying this, but he reminded me of Ed Kowalcyzk (Live) when he was still young and cute and earnest, before he starting singing about weeping sea life.

I love when this happens — when I enter a show with no expectations, and am completely astonished by such a blazing performance! Did I come in here to warm up? Done. And then some. I didn't write any notes about The Walkmen, so onward to Hot Hot Heat!