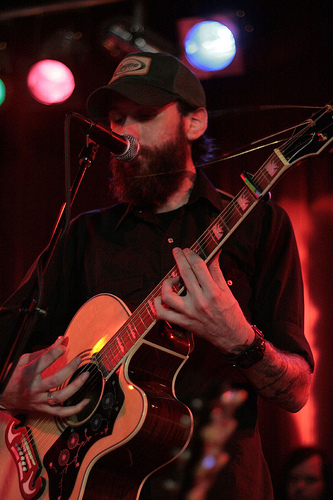 Hear a track from the forthcoming Grand Archives record (!!)

It's no secret around here that one of the greatest musical happenings of 2007 for me was Grand Archives, the latest project of the amazingly talented Mat Brooke (ex-Carissa's Wierd, ex-Band of Horses). The band's four-song EP from 2207 — which earned them praise from Pitchfork as well as a spot on the Sub Pop register — has been a staple in my musical diet.

Needless to say, the band's debut full-length is one of my most anticipated records of 2008. And the wait is nearly done; The Grand Archive releases on February 19th.

But here's why I'm writing today… Sub Pop has made a new track available for listening. Rejoice! It's called “Torn Blue Foam Couch” and it embodies what made me fall in <3 with the band's live show: gentle lead vocals, stellar harmonies, soft rock sensibilities, echoes of wistful longing countered by pleasant melody, just the right amount of crescendo… it's lovely.

Enough of my blathering; you can listen for yourselves…

And mark your calendars for the live shows. The band plays a free all-ages instore at Sonic Boom in Ballard on February 19th (7p) and two official CD release shows at the Triple Door on February 20th, with Sera Cahoone.