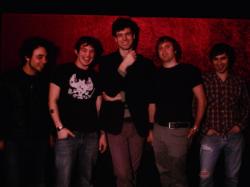 Anyone who's worked at a music label, venue, or publication knows that sorting through piles of demo CDs can be an occupational hazard. It requires a diligent breed to sort through the CDs to uncover bands worth signing/booking/reviewing. There's always that magic hope: to be the pioneer, the one to find a gorgeous gem in the rubble, to hear something first, to savor it, and of course, to share it.

Of course, I can't claim credit for this discovery, for two reasons I must disclose at this time:

Still, after how enamored I've been with their demo CD, I knew I had to see them live and report back about how great I knew they would be. In fact, I dragged my incredibly-good-sport-of-a-visiting-from-out-of-town mother out to a Friday night show at the Croc in order to be able to do so.

And I was right! Slender Means sounded gorgeous live… so sonically evolved to a point it takes most local bands years of gigging to achieve. Within their set of gorgeously melodic songs, I heard influences equal parts Ian Curtis and Ian McCulloch, with nods to the Strokes, the Stills, Travis, the Lashes {sans their infamous vainglory}, and the Valley Girl soundtrack.

Most noteworthy point this evening was lead singer Josh Dawson's voice… it was incredible. He has a staggering vocal prowess… deep powerful vocals that can range from crooning like Rufus Wainright on the sultry ballad "This is Love" to soaring like Travis's Fran Healy on "Inter-City Transit", effortlessly ranging from lush baritone to lofty falsetto, with a fluency in each like a first language. I suspect formal vocal training.

How could you not love a band named after a Smith's lyric, I ask you?

You can tell Slender Means took their time with the recording process, and paid attention to all the right details. It is like a properly steeped tea. It's clear that their album was created by someone with a clean kitchen who does their dishes. They understand the details and what is important.

Totally. And I bet they shop at Whole Foods.

I bet frontman Josh drives a practical mid-size car — and we all know there's nothing sexier than a talented guy in his practical mid-size car. He's also no novice to the local music scene. He is a former member of both Light Heavyweight and Fields of Mars. Other band members Sonny Votolato {a Rocky relation?}, Dave Martin, and Paul Pugliese {guitar, keyboards, and bass} all also play with the local band Bugs in Amber.

Ah hah! I knew these guys had musical experience!!

'Twas totally worth taking my unwitting parental unit along… even Mom admitted that Slender Means is "pretty good!" My only regret of the night was that we didn't get to stay to hear the fabulous Turn Ons. Next time…