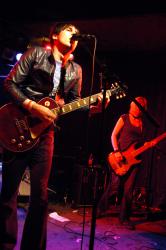 stellastarr* with the Raveonettes & Kittens for Christians

The TIGs divided and conquered for the stellastarr* return to the Pacific Northwest: igLiz saw them at their Friday night engagement in Portland, while igChar and I saw them on Saturday at the Crocodile.

Why the war-like imaginary strategy, you ask? Because poor igLiz had a wedding to attend in Portland on Saturday. You should have seen the look of impending moral dilemma when she realized the double booking. But — as this is her seventh wedding commitment this year — she has become the pro at balancing her indie-rock and formal-attire events.

The gods of all that is good and fair smiled upon me and arranged it so that stellastarr* would be performing in Portland the night before their Seattle show (and my friend's ill-timed wedding). Hallelujah!

Not that I, FOR A SINGLE SECOND, thought about denying the fact that I RSVP'd to the bride weeks in advance — or considered feigning a contagious illness or work-related emergency.

No way. I mean, who would possibly skip an important event like a wedding just to see a really incredible band perform songs from one of their favorite albums of the year?

But Liz — when I spoke to you the morning after you saw them in Portland, you told me the show was so incredible that you were considering skipping the wedding and driving back to Seattle to catch stellastarr* a second time. They were THAT good.

Oh… uh… yea… well, you know… it was a great day to be on the road… no traffic, and clear skies… and… GEEZ LOUISE, they were awesome!

But callous rationalizing or not… how long are we going to be able to catch them in such an intimate setting? We don't have the resources to follow them back to their native NYC for a secret show now and again.

She is right, of course. igLiz is always right; stellastarr* is always breathtaking… and they won't be playing Crocodile Cafes for long.

At both the Portland and Seattle shows, Kittens for Christian opened the night. They've been playing together since I was in grade school {practically} and they cite the Pixies, the Birthday Party, and Sonic Youth as musical influences… which sounded like an AOK list to us.

Kittens for Christian were unexpected. Their sound nearly frightened me, foreboding and dark, yet they possessed New Wave influences melded with their ominous assault of thunder sound, like a wailing Riki Rachman/Robert Smith hate child.

I must thank KFC {what came first, the catchy acronym or the Christian part or the Kittens part?} for giving me something that I have picked up from their set and have used to slightly entertain and eventually annoy my friends in the weeks since the show.

Dana, with her odd-but-clinical knowledge of all things speech therapy, might have the official terminology for it… but lead singer Hiram, in the most of Long Island version of Robert Smith tones, replaced the "-er" ending each "-er" ended word with an "-a" — so that "cover" became "cov-a!", "lover" became "lov-a!" and the like. It was more than just a Mark E. Smith nod… Hiram's "-a" trademark had a whole different edge.

Now my proclamations of cloudy day take the form of, "Today in the weath-a! There is cloud cov-a! Get out y-a! umbrell-a!" Whilst others might be amused for minutes, I was personally kept giggling for hours. Thank you Hiram! Just as the phrase "Penal Colony" had lost all of its luster {lust-a!}, I receive this.

Impersonating the Fall was never this fun.

OK, I admit it: I wanted to tell the singer guy to open his mouth a little WIDER when he sings. I have no technical speech therapy term to offer but this: enunciation.

I couldn't figure out if he was using some sort of voice distortion or if he naturally sounded like that. I wonder if that's his speaking voice?

And he kept turning to the drummer. I couldn't figure out if he was conversing with him or if he liked giving the audience glimpses of his bum.

Bum or not, I was focused more on which stellastarr* shirt to buy than their individual songs. Speaking of which…

stellastarr* started off their Portland set with a non-album track… an abrupt stop and go number named "School Ya" that simply screamed "elusive b-side."

I was particularly fond of the chick-name set, featuring a new song "Angela" and hit single "Jennie." The new one was way more tender love ballad-esque, and both would make it onto my mixed tape of great songs with girls names in the title {e.g. — Allison, Veronica, Valerie Loves Me, Oh Sherrie, Nora, etc. etc.}.

stellastarr*'s songs are like boats — always named after girls.

I think that most of their songs are about girls — well, girl-related turmoil. The songs translate 1980s John Hughes moments into smart, therapeutic, catchy ginseng for the soul. They both refresh and tucker me out, I love them so much — I can't break the stellastarr* cycle. Sure, there is that one line in the chorus of "Jenny" that makes me tense up {"Oh wa oh… ah. ah. ah. ah. Oh wa oh…"}, but when lead singer Shawn screams "it's a soul-searching mother-fucker!" all is forgiven and I hit repeat, again.

What they've created is reminiscent of your favorite REM, Cure, or Wedding Present album. No matter when you listen to it, you are thrust back to the intensity of emotion of the first time you heard it, yet it translates to the mindset of present day… so that it is both timely and timeless.

Therefore, I propose that after their third album {hey, I need MORE stellastarr*}, they should take a break fr
om recording records and write, "stellastarr*, the Musical!" It would be perfect… it would address all the great quandaries of our youth, and I bet that David Bowie would make a cameo performance — and it would have a kickass soundtrack.

And they could all star in it.

Plus, Amanda is so stunning. It would be worth having to endure a musical if she agreed to star in it. One day she's going to get snatched up for a Cover Girl® ad, or be a Gene Juarez hair model. I just know it.

But the thing is, she's all kindsa gorgeous like that AND she KICKS ASS on the bass. Neither fact went unnoticed by the avid fans in the crowd {and yes, Ben, I'm talking to you…}

And you know what — I read that when she started playing with Shawn {singer} and Arthur {drummer}, she actually had never played the bass before. She was trained on the cello…

Hmmm… I gotta get me a cello.

Yea, she rivaled the Thermals' Kathy Foster in both her uber-stylie sense and her bass-pounding prowess.

I know! And, not to dwell on the obvious, but Michael {bass}, Shawn and Arthur probably get their fare share of innuendo-laden fanmail as well. Flawless skin and sultry eyes, {faux?} leather tight retro jackets, shirtless drummers… I've got to see these folks on Broadway.

Phew. After all that stellastarr* gushing, I'm spent. And we still had headliners the Raveonettes to see!

Those Raveonettes certainly are good at what they do… and they do it at such a loud volume, one can easily get sucked into the time warp they create with fuzzy feedback and all the other beautiful things Jesus and Mary Chain: echo, reverb, sophisticated intensity, and the scent of a weathered craving.

Except — where Jesus and Mary Chain perfect such effects with starkness and darkness — the Raveonettes meld with the Beach Boys.

They respectfully nod to the 1950's to such extent that their set felt like a dream sequence. Ok, so I might have still been a bit post-stellastarr* lightheaded… but within 15 minutes of their set I was looking for the Pinkettes and boys in Buddy Holly specs.

I also enjoyed their set, but I had to hang my imaginary head in shame when a Raveonettes superfan approached me right before their set and asked me a plethora of superfan questions.

Yeah, like "What's your favorite Raveonettes album?… Did you know that Sharin Foo eats a peanut butter, jelly and bacon sandwich every Monday at 2:30 p.m.?" I had to break his little heart and tell him that I had primarily come to see stellastarr* and that the Raveonettes were an added band bonus.

Did he throw his drink at you in disgust?

No, but he did look like he was going to cry as he said, "Yeah, that Stellarstruck band was pretty good, but they're not the Raveonettes." Then he pushed his way closer to the stage.

Ahh well — can you blame him for striking up conversation with you? Such peanut butter jelly and bacon sandwich trivia shouldn't be left unshared.

I wonder what stellastarr* have to eat for lunch on Mondays?