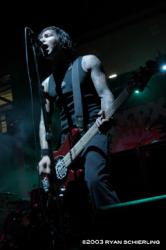 You can't hang out at the Croc forever, so I crawled out from under my indie-rock September 28 to check out the Vendetta Red/ Brand New/ MxPx/ Dashboard Confessional show at the Seahawks Stadium & Exhibition Center.

Arriving downtown to pick up a photo pass three hours prior to doors opening reminded me why I love shooting at The Crocodile, Graceland, or even at The Showbox. No fuss, no muss, and I can always find a spot front and center, even after hanging out and drinking beer for 23 minutes after bouncers start checking IDs.

I walked past the line that had formed out front, comprised entirely of teenagers that looked like they would have gotten the crap beaten out of them by the high school football team thirteen years ago (when 'alternative' music wasn't quite as prolific as it is now — trust me, I know). Around the back of the gargantuan Exhibition Center was the bus entrance, where, behind a chain link fence next to the railroad tracks, five intrepid superfan teens stood peering into the dark cavernousness of the parking area. If they squinted just right, they could see the three large tour buses, various band members' wives and girlfriends playing with a dog, skateboarding tour managers and maybe, just maybe, MxPx Tom carrying a twelver of Coors Light off to the dressing room.

I stood in the darkness with Central Kitsap Reporter reporter Sean Lamphere, there to interview Bremerton natives MxPx, and waited. Finally, MxPx Mike made his way off the Bremerton-to-Seattle ferry, MxPx Tom untangled himself from Mariners traffic gridlock, and we all joined MxPx Yuri in the dressing room for the newspaper interview with Sean. I sat in and listened through the course of the chat which included, but was not limited to: the new album on Universal (Before Everything and After); having the song "Well Adjusted" back a Diet Pepsi commercial that aired during the last Superbowl (which prompted a good laugh about joining the likes of Pepsi spokes-musicians Madonna, Britney and Beyonce); listening to Rufus Wainwright and The Fire Theft (Yuri), old country tunes (Mike), Misfits, All/Descendants and "lots of demo tapes" (Tom); being recognized in their hometown and what could be construed as a "uniform" in Bremerton (sweatpants and sweatshirt); on being called 'Christian punk rock' ("We're not preachers") and Sean's constant use of "Sure, sure…" as rebuttal.

What I came away with, aside from the feeling that any one of these gentlemen could have been a good friend in high school, was that they were genuinely genuine. Nice guys. Nice, punk rock guys. But, there were other things to do, and other people for Mike, Tom and Yuri to talk to, so Sean and I split for the smoking area outside the Exhibition Center. The line out front, it would appear, was growing.

Eventually, the doors opened and a sea of youth filled the Center. Well, not really filled, as the space had a black curtain hanging from rafters to floor midway through to cordon off the space. I guess Dashboard Confessional doesn't pack 'em in like they used to. Sean and I quickly determined that the median age was 16, maybe 17, and that the recent survey by Ohio State University for the U.S. Department of Labor was right on — the average teenager gets a staggering $50 a week in disposable income from parents. And with tickets costing $20 and Dashboard hoodies running $25, that left $5 for an all-ages concession stand Coke. Sean and I also determined that there's nothing quite as disturbing as a soccer-mom pulling on the same youth small baby doll concert tee as her 13-year-old daughter.

Vendetta Red was the opening act, and that's not something you're going to see often very often. The first thing that struck me about VR was probably the first thing that strikes anyone seeing them for the first time: Zach Davidson has got some pipes. Whatever space wasn't occupied by bouncing teenagers was quickly filled with the loudest amplified screams I've ever, ever heard from a frontman. A few days later I watched The Who's The Kids Are Alright, and saw the uncanny traits Zach shares with 60's rock icon Roger Daltrey that everyone talks about. The hair. The attitude. The stage presence. The whirling microphone. The voice. And I might piss off some rock purists here, but I'd go so far as to say that, in 2003, Zach does it better than Roger. What did the kids think? Fan #1: "Did you take a shit?" Fan #2: "Yeah, I pooped, and then I listened to 'Screamo'."

When Brand New arrived on stage, an honest-to-god squeal went up from the crowd. The first two songs left no impression whatsoever, but with all of these youngsters screaming their hearts out for a band deemed "buzzworthy" by MTV2, there must be something worthwhile in the music, right? Who knows, but I'll bet money that these kids are going to be listening to whatever futuristic equivalent to Journey there is in the year 2020.

Smoking rant #1:
EMO. Derivative of "Emocore." If you were born after the mid-1980s and aren't sure who Husker Du or Fugazi are, AMG All Music Guide has a pretty good handle on bands that defined the sound (despite my refusal to subscribe to musical sub-sub-sub-genres) by breaking out of their hardcore roots. I think it's all just post-hardcore rock-and-roll. But Brand New and DC are categorized as emo? Huh. Go figure. MxPx were up next, and "the most famous band to ever (and still) call Bremerton home" (according to Sean) were all over their punk rock game. They launched into "My Life Story" and didn't soften up until the acoustic version of "Buildings Tumble" halfway through the set. Vendetta Red's Zach joined them for, appropriately enough, a cover of The Who's "Teenage Wasteland" on the second-to-last song, and then the foursome finished up with "Punk Rawk Show." They humbly thanked all of the hometown fans, and promised they'd be back soon.

Smoking rant #2:
Now, teenage music fans who think Good Charlotte, New Found Glory and The Ataris are doing anything new… they're not. MxPx has been tapping that vein for ten years now, and members of the aforementioned bands know it. All three made guest appearances on the new MxPx album "Before And Everything After." Good Charlotte's Benji even has an MxPx tattoo. So get over yourselves.

Smoking rant #3:
Dashboard Confessional's Chris Carrabba has been called everything from "emo-cult hero" to "punk troubadour," but I still can't figure out why this band is so deserving of fame, fortune, and some other fleeting "f" word that I can't quite muster right now. Carrabba graces the latest issue of Spin magazine, hair all dippity-dooed up and with a sensitive pout that must just slay the female 13-17 year-old 'Hot Topic' demographic. Is it a mallternative marketing ploy by the label? Or is the guy really that 'emo'tional?

I gave a listen to some of their songs on the DC website, and they seem to tread back and forth upon already well-covered ground. Emo? "Tonight I'll Take What I Can Get" sounded more like Dylan,
or a less intelligent rip-off of The Mountain Goats' John Darnielle. IgLiz, when pressed, qualified the general sound as "sub-folk," and I'm not going to question a girl that has more CDs than days I've been on this earth (365×31= a lot of music).