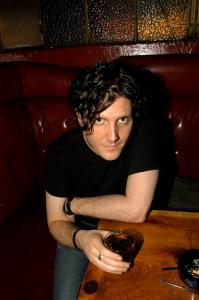 So, you can imagine my um… delight when a stellastarr*/imaginary Liz interview time was set. No worries that, at the designated interview time, I was scheduled to be en route to Portland for a dear friend’s wedding, or that time/fate necessitated that it would be conducted using sketchy cell phone technology somewhere between here and there {note that my cell phone sucks… I usually end up saying a minimum of 45 instances “what?” “is there an echo on your end?” “a melon-baller who?” for each 5 minutes of talk time}.

Thank goodness for Kelly, who volunteered to drive while I interviewed Michael Jurin {stellastarr* guitarist and heartthrob}, adequate Southern Washington Sprint PCS coverage, and {most of all} for the Michael and mochas. With that, I bring you a transcript excerpt of a stellastarr* phone call that began in Centralia and ended near Kelso.

Coffee Specs:
I like mochas the best. I don’t really care where I get one. I’ll take a mocha from anywhere.

You are touring with the Raveonettes this time around… and your first European tour was with them. You all must be really close by now. How did your bands first meet up? Was it love at first sight?
We originally hooked up through our booking agent. We got really lucky because they are great folks and they are great to be on tour with. For this tour, it worked out again!

What are you listening to on the road?
Um… {the sound of clanging plastic against vehicle carpet in the background}… the Jesus and Mary Chain… Interpol… and a lot of mix cds. Arthur (drummer) makes really good mixes and brings loads of them on the road. I make some mixes too… and every once in a while we get the chance to actually DJ at places.

Sounds like you are a big music-connoisseur. What’s your favorite record or band that you think is most overdue for the deluxe-reissue-2nd-cd-of-demos-extensive liner notes treatment?
I don’t know. I am one of those folks that when I get into a band, I really get into them and I try to find all the different versions of stuff and the demos, etc. So usually, those reissues are just repeats of what I have already heard… but I would love to hear some more unreleased Cure stuff.

So what was the first band you ever became obsessed with?
I guess that would be Pink Floyd. My brother was really into them, and so I heard about them from him. I searched out everything I could find and listen to it over and over.

Do you think you’ll ever stop using the asterisk in your name?
Who knows… we’ve gotten a kick out finding the different spelling and versions of our name when ever roll into a new town. We certainly aren’t sticklers about it…

We’re all artists and we like it in there for aesthetic purposes, but we aren’t going to scream and demand and complain when it isn’t in there.

So, your band is from New York… what’s the most New York Rockstar* thing your band has done this year?
I would say it was when we went to the UK for the Redding festival. That alone was exciting… it was the first time we’d ever played a festival and in the UK!

So, we were all thrown off our usual time schedules because of the time zone changes and touring… and so I walk into one of the beer gardens and look around to see what is available and decide to order a beer. The lady behind the counter is like… “Um, we don’t serve beer until noon… it’s 11 in the morning.”