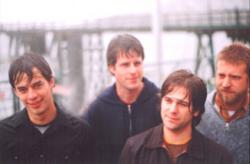 In my seven years living in the Pacific Northwest, I've found you can generally count on guys who hail from the greater Skagit/Whatcom county area. Perhaps it's something in the tulip fertilizer, or all that good clean near-to-Mt-Baker living… I can't be certain. What I do know is that Bellingham's the Pale epitomize this phenomenon: as kind and adorable as they are melodic and talented.

I've been a huge fan of their 2002 release Gravity Gets Things Done for some time, but had never seen them perform live {unless you count karaoke, like when Gabe and Greg covered "Roxanne" at our rockstar suicide karaoke party last June, which doesn't really count but was still was one of the greatest things I'VE EVER HEARD}. To say I was near giddy with anticipation to hear them perform sans karaoke-added reverb and supplied with… you know, instruments and stuff… would be an understatement. To say they exceeded my expectations would be the truth.

My overall impression was how utterly joyous the experience was. While hearing the brilliance of their well-crafted indie-pop hit-inevitabilities such as "How to Fit In," "Reasons to Try," "Fixed on a Pattern," and the aforementioned "Gravity Gets Things Done" would be enough to give me a nummy case of the warm fuzzies. Watching those guys onstage as they obviously relished playing and sharing each note of their songs — I felt genuine mirth.

Gabe jumped on his piano bench, played while bouncing on his feet with bended knees, and flailed his tongue out with joyous intent; Greg pounded his drumkit with beatific abandon. They gave an effortless glee to their music, a lack of pretense that was as aurally pleasurable as it was refreshing.

They love to play.

It was a very well-rounded set that left me more full and satisfied than mom's 12 course Thanksgiving extravaganza. Their opening song {the appetizer} was a cover of the Police's "Walking on the Moon" {what with that and "Roxanne," they must have a Police fixation… which is a good thing!}, the second their "radio hit", the third was a sugar sweet ballad.

For the fourth song Gabe switched to the keys {which also involved him standing on his chair while playing} and they ended the night with a tribute/cover to a Seattle band {United State of Electronica}. Mmmm, how I love dessert!

I realized I had a big cheesy grin on my face throughout the entire set and was bobbing my head back and forth like one of those annoying bobble dolls. Hey, imaginary bobbles. Now, that's an idea.

It's refreshing to listen to a band that's total rock star material, but they're still humble. Gabe thanked the other bands numerous times and even said they've been looking forward to this show for weeks. I can't remember the last time I got so excited about a band after only consuming half a beer.

Here's some more scoop re: the Pale: they've just signed to SideCho Records, a label based in Southern California, who plan to re-release Gravity Gets Things Done on January 13th, 2004. The new version of the CD will contain two new Pale songs, and they told us to anticipate a fun release party at Graceland mid-January.

So what about your old version of Gravity… will you have to buy another copy to hear those two new songs? Those nice guys of the Pale have anticipated your concerns, and have drafted a New CD FAQ on their website, including this:

"We will be offering the rerelease for an amazingly low price on our website a few weeks prior to its release… There will be another special way to get the cd that we'll announce closer to its release!"

See? We told you they were sweethearts…