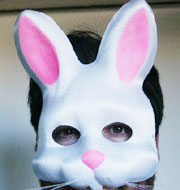 Just when you thought you'd finalized your top 10 releases for 2003, Slomo Rabbit Kick throws a CD release party for their latest record, Bass Monster Lives in the Bass Forest, which features cover art that resembles Where the Wild Things Are and contains a tasty pop-Thanksgiving blast heaping of insanely irreverent indie-rock tunes to enliven your holiday season.

His droll vocal delivery sounds like someone is slightly slowing down the LP by placing their finger on it, giving it a charmingly wound-down effect, a delightful dischordancy. With the backbone of support from an incredible rhythm section and quiet little bass chops, those silly lyrics get delivered with an insouciant disregard for formal melodic phrasing, but with a near-mathematical complexity that makes it all logical, in its wacked-out chaos. The songs meander lyrically and technically, but with skilled purpose. As far as I'm concerned, those boys from Slomo have permission to venture down whatever path they want, as it's clear that they know exactly what they're doing and where they're going, no matter how bizarre the trail may appear in the Bass Forest.

The band has such a rich musical history, including of course the incredible Revolutionary Hydra, which Jay drafted what appears to be a Visio flowchart outlining Slomo's involvement with like… every band that's ever existed. I feel Jay could give that Kevin Bacon a run for his money — or at a bare minimum, would have one helluva lot of friends in his Friendster profile, if he chose to set one up.

But you know, I bet he doesn't have a Friendster profile. The band showed a complete lack of pretense to complement their wickedly deadpan sense of deadpan humor. "Thanks for coming to our CD release party," said Jay after the first few songs. "You can tell it's a party cause we're more animated. I think I moved my right shoulder on that last one."

Slomo Rabbit Kick is a little too bizarre to be true popstar mega-masters. I happen to think that's a very good thing.