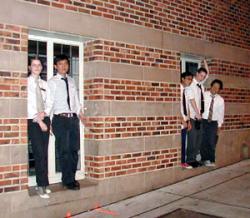 Asahi were the winner apparent of the show, with most of the performers that night cracking jokes about how Asahi would win. Well, with just cause, as Asahi are:

1) very cute
2) very talented and
3) the only band of the night that contained a girl.

Asahi was the only band I had heard before tonight's performance, and as with previous shows, I was calmed by their languid gentle keyboards, inspired by their melancholic lyrics, and impressed by their quiet elegance. However, if I provided 27 different adjectives for Asahi's sound, "cute" wouldn't make the list. And I mean that in the nicest possible of ways.

They did *look* cute though, with all band members donning matching ties and most of them wearing mismatched Converse. Plus frontman Tomo charmed us with his flattering banter. "So I just wanna say I think all the bands here tonight are super cute," he said. "If there were a prize for cutest audience ever, you all would win." You could sense the collective "awwww" that accompanied that one.

This was my first time seeing them but had heard them on KEXP numerous times. I knew even before they set a foot on the area- where- the- stage- should- be, that I was going to be enveloped with sweet sweet blissful sweetness. As they made their way through the too-short set, I realized that more than sweet, their songs were so evolved and compelling. The silky male lead vocals overtop the slight, gentle female tones made me listen in awe.

"Nice, mellow and forlorn were all words that came to me while listening. They were also the only band all night that had a girl in it, which I'm sure helped when the boys in the audience voted," said our honorary-imaginary-all-ages correspondent, Alisha.

She contined, "It also didn't hurt that the lead singer told the crowd they were the cutest audience he'd ever seen. There's nothing like a little flattery. The matching dress shirts and ties were a nice touch. The music made me feel like I was sitting in my apartment on a Sunday morning eating breakfast with my beige cat. But I quickly came around and realized it was Friday night, and I don't have an apartment, or a cat for that matter."

Couldn't have said it better myself.