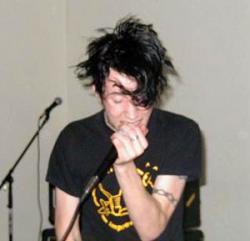 In terms of pure cute showmanship, there was no doubt in my mind that Blue Sky Mile's frontman would win. From his get-up-and-go vocal stylings and moves to his oh-so-rocker-boy tats, he tossed his hair and danced his skinny pale indie-rock body all over that lack-of-stage space.

If anyone had misgivings that the Fusion Cafe needed a stage {imaginary aside: the whole evening was sponsored as a fund raiser to buy the Fusion Cafe said stage) this boy assuaged all doubts! This is showmanship to be elevated!! Get a stage on which this boy can perform!

Blue Sky Mile continued through their set of poppy-punk numbers, featuring a notable nod to Green Day as well as strong 80s sensibilities.

"They were really energetic, entertaining, even bouncy at times. But I ended up running up three blocks to get a new chip for Summer's camera, so I didn't see much of their set. Oh well," said Alisha.

Twas not an effort in vain. Now you can see for yourself how cute all the bands were! {I know we've said this many time, but a HUGE imaginary thanks to Summer for her above the call of duty efforts as imaginary photograper for the event!}

The lead singer is a late- 1980s- Berkely- Punk Conor Oberst with an intensity to match such a visual description. He would certainly give Ben Lashes a run for his money if they were pitted against each other. Ahhh…charisma and that power-punk-pop sound that gets me everytime.

I think he sang with a fake British accent in parts, which was a bit odd. Their songs used dramatically sudden starts and stops for extra pop-punches throughout, which I liked. Overall, I'd say this band had the most cute sound. But then, no one asked me…