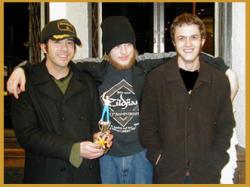 Finally {!} a contest in Seattle I can judge. I may not know my wine or textiles, but I know cuteness. So, when I was actually asked to judge such a contest, I was not only excited, but vindicated in that I could finally put to use my elementary school pasttime of reading Tigerbeat magazine. I and five other like-talented individuals {Megan Seling and Adrian Ryan from the Stranger, Em'ma Gawd! and Anna Rexia, and Steve Migliore aka The End's "Steve the Producer"} were pulled together to fill the official "judge's sofa" and crown "The Cutest Band in Seattle." Oh wait, there was even an incredibly worthy cause for which we gathered – this contest was a fundraiser for the YMCA's Fusion Cafe. The all-ages venue desperately needs a collapsible stage for their shows. A worthy cause and a fun time. Could it get more exciting?

Overall, I'd say every band played a great set. And a huge congratulations to Kates and Allison and all the other fine folks at the YMCA for hosting such a fine fundraising event. We can't wait to see the new stage…

Liz and I also had the HUGE honor of meeting two new friends, Summer and Alisha, who we promptly dubbed our "honorary-imaginary-all-ages-correspondents" for the evening. Once you see the comments from them scattered throughout the reviews, you'll see why.

Plus, Summer provided us with all the outstanding photos. Without her extensive coverage of the event, there would be no record of how CUTE all these bands are. And Summer wants all you musicians to know she is available to take photos for "very little money." So — email us if you want photos by Summer!!

The judge's choice:
Ambitious Career Woman
"Each band participating in the contest had a distinct look… ACWs was that of your lab partner with the coy smile…"

The audience's choice:
Asahi
"I was calmed by their languid gentle keyboards, inspired by their melancholic lyrics, and impressed by their quite elegance…"

The Ocean Blue cutie look-alike award:
In Praise of Folly
"As it turned out, they provided plenty more cuteness fodder for my imaginary pen. Physically, the band members were all skinny cute indie-rock boys…"

The Green Day cutie sound-alike award:
Blue Sky Mile
"The lead singer is a late-1980s-Berkely-Punk Conor Oberst with an intensity to match such a visual description. He would certainly give Ben Lashes a run for his money…"

And they were cute too:
Lands Farther East
"They surrounded that with a haze of guitar and bass that allowed me to sink into the judge's couch hypnotized…"