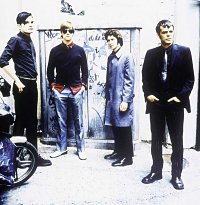 Interpol came back into town to promote their first album, Turn on the Bright Lights and once again gave Seattle the "It" event of the season. When they were here last September, the show was sold out and the place was filled to the Graceland gills with the potently stylish. The majority of the attendees left fully armed to refute all those who discounted them with claims of dirivity and band-of-the-moment status.

Yea, I was there. I had a fine time. And yes, as it was a momentarily historical event, I really should have reviewed it. I did have a couple insightful thoughts regarding their translation from album to stage. The packed smoky surroundings, the hype leading up to that show, the sweaty encore, the crappy choice of Heather Duby squished in between the stellar Long Winters openers and our Interpol headliners, and…. well, you get the idea.

But alas, I was, er, um… …I was in the throws of ultra-dreamy infatuation, resulting in me being a bit wrapped up in the coyly-holding-hands stage of courting. Interpol did serve as an excellent background soundtrack as we were pinned up against the back of the room, sitting atop the middle booth being goofy and lost in the moment. Understandable or not, such a distraction left me less-than-inspired to review Interpol the first time around.

Ahem… apology officially submitted. It shall not happen again…

This time, it was going to be different. Weeks leading up to the show, igLiz and I had big ideas about our review. The Interpol show should not go un-threeimaginarygirls.com documented.

Right, we were armed with pen and paper… and then… the next thing you know…

…We realized — we needed a night off. That's right. Sometimes even the imaginary need a vacation. An executive decision was made to just shut up and enjoy the show. We were not going to write about Interpol.

Nope. We just wanted to settle in for a full evening of music, for music's sake. No taking notes or writing about it for our next issue. No way.

Decision made, I bunked into our squished stage-left bar area of the all-ages show, surrounded by friends-of-imaginary-girls Renata {who also attended the September Interpol "It" event} and Jason with a slightly-interrupted view of the stage. We listened to Seattle's local hottie openers the Turn-ons.

They were sexy and stellar as usual.

I sadly missed the Turn-ons, but with just cause, as I needed to attend my friend Drew's 30th birthday celebration. I can't imagine they were any less than sexy and stellar {just like Drew}.

But, I did catch a bit of Calla's set. I remember they served as interesting background music and had some noteworthy guitar guy dance moves… and I think I would have enjoyed it had I been able to take my drink down front.

Agreed, but a girl has to have her priorities on this night before Valentines day.

Priorities notwithstanding, Calla did their job well. I'd heard a song or two on KEXP, but their set piqued my interest so much that now I want to go procure their album. But because we aren't going to review the show, such reasons for their shot up on the cd-wishlist shall go undocumented.

That's right! With our marginally clear view and proximity to the finer points of the Showbox, we opted to stay up top in the cramped drinkers' lounge with the cool kids and enjoy their conversation whilst standing behind the pole. Without notepads, without pens. In fact, we were hoping to black out so we wouldn't be able to remember a thing, thus removing the temptation to review the Interpol show at all.

Right. Though I kind of wish we were reviewing it, so that we could talk about the Interpol roadie who looked like he was the official understudy of the band. All dyed black hair and New-York-Wave'd out and such…

…And how the Imaginary Posse expanded that understudy theory to the whole band. Renata, who was right up front for their last Seattle show, swore that they did not look like that last time they were in town. Although I personally noticed a resemblance, I did think that it was obvious that lead-singer Paul has been working out. Those buff arms looked new.

If I were reviewing the show, I might mention that seeing Interpol live was like listening to Interpol on CD, just really, really loud — that is, Interpol sounded perfect.

Well, of course. They've been playing the same songs for the past year and a half.

They only messed up once, and you know, I think that was my favorite part. It reminded me that they are indeed human, fallible.

You know, I bet if they'd known how successful this CD would be, and therefore how long they would tour in support of it, they might have paid more attention to this lyric that has always irked me (a blemish on their otherwise darkly fluid content):

"Her stories are boring and stuff.
She's always calling my bluff."

"…and stuff?" Are you telling me that that line was a keeper? Don't get me wrong, I really like the album, but….

Liz — you're reviewing!! Stop that right this minute!!!

Oh right. We said we weren't going to do that. Can I just mention the keyboardist? A fairly recent addition {he wasn't with them the last time they were in town}, he was too perfectly dressed the part. He had that unmistakable Ben Lashes look. Maybe all the cool kids have that look…