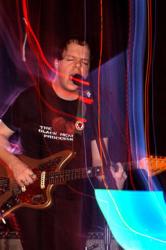 Sigh. What can I tell you about Hypatia Lake that you haven't already read on Three Imaginary Girls before? Our adoration of this dreamy-spacey band has been well-documented since we first saw them play at the Capitol Hill Block Party last summer. But since we haven't grown tired of listening to them, we'll stick with the idea that you all likewise haven't grown tired of reading.

Let's start with a little history…

"Lake Hypatia is a 66-acre campsite area outside of Birmingham, Alabama, operated year-round by the Alabama Freethought Association, and made available for the use of freethinkers and their families from around the country. The campsite at Lake Hypatia opened on July 1, 1991, and the Independence Day Celebration, co-sponsored by the AFA and the Freedom From Religion Foundation, began shortly after as an annual event."

Interesting, no? Wanna go back a little further?

"Hypatia, born in 370 CE, was a mathematician, astronomer, physicist, and the head of the Neoplatonic school of philosophy. Considered an enemy of Christianity by Cyril, the Archbishop of Alexandria, because of her education (education in the early Chruch was often equated with paganism), she was attacked and killed by a mob of his followers in 415 CE who flayed the flesh from her bones with abalone shells."

Pretty auspicious namesake for a band, no?

With downward glances to shoes as gaze-worthy as Ride, and layered space-rock effects that evoke thoughts from Grandaddy to Pink Floyd, their screaming guitars and airy vocals flow and gush like water. At times, they're a crashing river — then a moment later, they resemble their languid-lake namesake. With pounding rhythms and eerie sounds both live and pre-recorded, they feature rapids, and turns, and rocks and little interesting live things that swim both within and against the current.

Versatile and emotional as water, Hypatia Lake can comprise 90% of your body to float your vital organs, or they can innundate and drown you. While Hypatia Lake features vocals — remember I made that Grandaddy comparison? — the lyrics are used more as additional instrumentation than as a force to carry melody. They're provide another layer of interesting forces that swirl and pulsate around you within the control of the music. It's lush and gorgeous and ethereal.

And see hottie drummer Randy? He happens to be one of the coolest guys we've ever met — it's hard to imagine that someone so endearingly sweet can kick the shite out of the skins like he can.

Newly signed to the local Sad Robot Records (also home for Carissa's Wierd and The Terror Sheets), Hypatia Lake's debut CD Your Universe, Your Mind has a projected release date for late May 2003. Per the label, "The album's songs tell the story of a

fictional town and its inhabitants — of the monotony of working in the town's candy factory, of an elderly man who hasn't forgotten a childhood heartbreak, and the joys of childhood."

Our sources also tell us we can anticipated a tour this June. Rejoice! If you can't wait to hear them (and we suggest you don't wait), you can listen online to their live at KEXP performance from January.