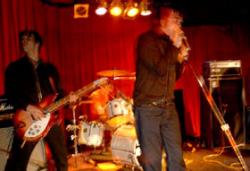 Take March 10, 2003. While listening to KEXP that fine afternoon, I couldn't help noting a strong eighties influenced (dare I say this…?) butt-rocking going on. Yes, you heard me right — though I disbelieved, and had to check my dial to make sure my new roommate didn't flip me down to KISW, funny guy that he is. But nope, it was my lovely KEXP rocking its little heart out like that.

Are you having doubts? I give you Young Heart Attack, Grafton, and to a certain extent even the Datsuns and the D4 as evidence of this trend. Locally, Lure of the Animal just rocked Imaginary Boy Michael X (as detailed in our last issue). It would appear that indie-rock is finally rocking.

It just may be time for Lloyds Rocket…

And really, it's about damn time. These guys started playing together in the mid-90's. They went on hiatus in the late 90's (with members continuing to play out with defunct local bands Ondine and Manray), and have reformed, written some new tunes, and been out-and-about playing for the past year or so. So nice that their reemergence coincides with the apparent comeback of the ROCK…

And what better place for my rock and roll epiphany than at Zaks. It's perfect. Thank goodness we still have Zaks in the increasingly monsterously gentrifying lower Queen Anne, with its pull tabs, tacky lights, and no-nonsense beer. Nevermind that I don't like beer — I like the fact that I can only have beer far more than I dislike the taste of hops.

Zaks doesn't even have a stage. The bands are gonna play on the linoleum floor, it's gonna be loud, and you're gonna drink beer, so you'd better just shut the fuck up and enjoy it.

Lloyds Rocket — well {ahem}… they rocked it. Featuring two screaming guitarists (Brian Gardner and David Bos), bassist Jon "Awesome" Whitney, drummer Kelly Lichtenwaldt, and singer Craig Roberts (like any damn decent American rock band should, goddamnit — no sissy keyboards!), the band roared through a set of incredibly catchy crashing blue-collar rock that left me clenching my earplugs and hooting into my cheap pitcher beer. I felt like the South Florida 80's kid I am. Huzzah for rock!

Plus, the band features five of the hottest black-dyed-hair indie-looking rocker boys I've seen. And no, none of them are named Lloyd (the name comes from the now defunct gas station/grafitti mainstay on 12th and Boren, just between Capitol Hill and the Central District — which, indidently, is for sale and will likely become condos or something else hideous in the coming months, weh!).

The band played cleaner and tighter instrumentally than your average indie-band (after all these years of playing together , I'd call them tight-approaching-flawless), and I found myself thinking that if they dirtied up those guitars, The End would be clamouring for them. Craig belts like the STP best of 'em, wailing like a tyrant, reverberating his lower jaw like a rock madman as he rages about his how his "Anger" is "Bringing him down, down on the ground!"

They don't just rock — they pummel. Heavy and overt, Lloyds Rocket are a sheer auditory assault. So check 'em out… that is, if you think you can handle it…

{imaginary aside/rant: After their performance at Zaks, the boys headed to play a handful of shows down in the City of the Angels, where I caught them making Seattle proud, headlining at the world-famous Whiskey-A-Go-Go. Their straight-forward sincere rock roots totally outshone the pretentious frat-boy local wanker-rock that preceded them on the stage…. Now I'm not one to gratuitiously harsh on local bands. But opening band Trak 13 had me literally moaning in my Mandarin and soda for my beloved Seattle scene, watching their front man macho-rock stomp his way around the stage in what looked like a black Heftybag button-down vinyl shirt and Dockers, cheering the audience to "Support the president!" because we were "Kickin' some Iraqi ASS!" If we dared doubt his wisdom, he challenged us that, "If any of you think we shouldn't enter this war, why don't you go spend a day in Iraq!" Profound indeed, from this richie kid who probably couldn't even spell e-n-l-i-s-t. Just what the world needs: Republican rock. Now this site is for supporting music, not expressing political views… but I gotta interject here: cheerleading your hooting fan base about *killing people* as if it were some sort of pep rally — that is just sick and wrong. Frankly, I might have found this band remotely less offensive if musically they hadn't SUCKED worse than suckage could suck. Bleh. If this band ever plays in Seattle and you are in a local band, please refuse to share a bill with them. They are a menace and shouldn't be allowed to cross north of Santa Barbara. Anyhow, off the soapbox I go. Thank God for Seattle local music, and three cheers to Lloyds Rocket for following them up with a heavy dose of class and ten times the musical prowess of the local clowns. Hip hip huzzah!}