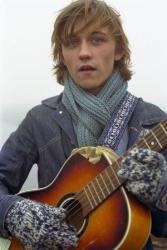 Sondre Lerche. OK, I'm first to admit that I don't know much about him or his music. By the time he arrived in Seattle this week I'd heard (and, yeah, enjoyed) igLiz's copy of his CD Faces Down a total of once.

So prior to his two recent local appearances, I knew for sure that he was a lil' Scandinavian croonie cutie pie.

And after the 3/3 and 3/4 appearances (spiffy new Sonic Boom Capitol Hill and The Crocodile, respectively), that's still the extent of my knowledge.

Well, ok, not quite. I know he's 19 years old and from Bergen, Norway (more on that in a minute). He's not as Edward-Nortonish as his CD cover art would have us believe. And he's pretty danged talented.

My attendance at the Sonic Boom in-store happened almost by accident. My evening's planned event was canceled, so I suggested to my extremely-disappointed date (who wishes to be identified only as Imaginary Taigan) that we check out the welcome new addition to our 15th-area hood. Standing outside the packed house we heard the last few songs in the set (sweet and smooth acousti-pop, delivered with a delicately-toned Nordic kineticism), then proceeded to check out the Sonic Boom wares as the masses filtered out of the body-heated establishment.

Sondre was cordially greeting a long line of CD signature seekers, and after a few minutes of perusing the aisles I noticed an unmistakable Superfan hogging the increasingly perturbed mini maestro. You know the type. I went about my business and looked up a while later only to discover Superfran (which we'll call this girl since she was indeed a female person) approaching our troubled troubadour yet again! "OK, where's the tent?" asked IT. "'Cause she sure seems to be camping out."

(Rumor has it that a very similar Superfan made an unscheduled appearance at a decidedly non-public Sondre engagement the next day. But I'm not one to gossip, so you ain't heard that from me.)

At Sondre's Crocodile show (he shared a bill with Nada Surf and the People, neither of which I was around for) our sweet serenader really cranked up the charm. "Dead Passengers", "Sleep on Needles", and a delightful surprise cover of Cole Porter's "Night and Day" were highlights.

At one point between songs the magnetizing melodist explained (in an adorable North Germanic lilt) that Bergen is a sister city to Seattle, that therefore, "We're all sisters," and that our burg reminds him a lot of his. Upon arriving at Sea-Tac, "I could swear I was at home when I stepped outside the plane," he writes on his website, "and smelled the smells of a moist city along the west coast."

Superfran or no, visit your moist sisters anytime, Sondre Lerche.