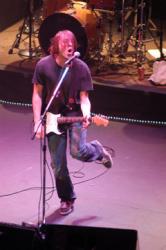 The night of the long-awaited Vines show, I fell victim to a miscalculation of my own mathematical "what time the band is going on" formula. The goal of this wonder-formula is to provide the appropriate window of time I need to arrive at a venue to catch all the bands on my wish-list and allow for minimal misuse of time.

But this time, the formula failed me.

Rather, I failed the formula.

I mistakenly relied on data gathered from my innumerable patronages of a variety of Seattle venues (the Showbox, the Crocodile, Graceland, etc.). As this was only my second visit to the Moore Theatre, I erroneously assumed that my previous start-time findings were transferable.

Doors opened at 8pm. Thus, I assumed that a 9p arrival was most appropriate to catch both the opening act and the headliner. When we walked in, I heard a band start and assumed (remember that to assume "makes an ass out of u and me") it was the Music — a band that I had seen at T in the Park, listened to their album and was still left less than impressed. But, I was going to give them a chance to redeem themselves this night (as a bunch of respectable sources had been pleading their case to me)… but first, it made sense to have a drink down in the bar and then head up a few songs into the set.

So certain that it was the Music that had just started playing, I took my time getting to the bar by stopping at the Sonic Boom Records booth. I used the to finally meet the engaging and trendsetting Ben Lashes hottie and the outstandingly friendly Eli.

Imaginary Boy Photographer Ryan, out-of-town guest Andy and I made our way to the basement where we could still vaguely hear a bit of the live tunes while enjoying a drink before heading up to our balcony seats.

As we finished up the libation a voice behind the bar yelled "Last Call!" For some reason, rather than thinking… "Last call? That must mean that the show is almost over… I best get my butt up to the balcony!" I translated "Last Call" into "Oh, let's get another drink and then leisurely head up… I can't wait to see the Vines and the last half of the Music. What a fine night of music this is going to be!"

That was when the voice of reason in the form of IBP Ryan said, "I hear there's a band playing upstairs…"

"Yeah, I wonder when the Vines are coming on?"

Ryan then calmly informed me "They're on now…"

Immediately I exclaimed, "the Vines are playing?!? Right now?!? This isn't the opening band??? Quick! Slam your drinks!"

Troops rallied, we sprinted up the series of stairs and ramps to the balcony — just in time. As we turned the corner into the seating area, we looked to the stage and there was Mr. Vines (frontman Craig Nicholls) on all fours sliding his guitar along the stage floor.

Over the next 50 minutes, while covering nearly every corner of their debut album, Highly Evolved, lead-singer Craig mesmerized all in attendance. His mild yet chaotc antics kept all eyes firmly on him as he stumbled to and fro from drink to knocked over mic stand during the course of each song.

If you've read any album reviews, you've seen the name "Nirvana" pop up in each one. To make sure I don't lose my membership in the International Order of Music Reviewing Wackos, I will bring it up only to say.. yes, on the album there is an unmistakable Kurt Cobain-esque sound vocally. The majority of the time, Craig's screams sound like they are sampled Nevermind outtakes. Live, the nod to Nirvana is more in the delivery rather than the sound. As with Kurt, such behavior from a lesser performer would be labeled annoying, forced, or unnecessary. Craig's stage presence is so captivating I

forgot that I was surrounded by strangers in a packed Moore Theater.

Who would have guessed that seeing them live would stir up such feelings of affection? The boy knows how to break his mic stand multiple times in a set, he's genuine, a good song writer, and has a great (yet not too intelligible during this performance) Australian accent. What is not to like?

This is what watching a sporting event must be like for sports fans. Andy and I were nearly twitching from sensory overload. We couldn't take our eyes off the stage for fear of missing a crucial swagger or throwing of a beer can. We were amazed that Craig hit every note vocally and guitar-ly, regardless of what items were toppling over, or the fact that his unflappable band members kept one eye on him at all times with "just don't fall over or knock us over, you wanker" bubbles over their heads.

As the show progressed, cymbals were tumbled, amps were pushed off their monitors, guitars were swung around by their straps and the number of mic stands knocked-over and broken topped 162. Just another day's work for Craig while his bandmates remained stationary and introverted.

Yes, such antics kept us thoroughly entertained, but it also reminded us of the substantial worth of a Roadie. That Vines roadie was on overtime. He switched out empty beverages containers, fixing all 162 knocked over mic stands and traded out all 74 injured guitars without missing a beat.

"That roadie has the worst job — ever. Do you think they call him Mom? All he does is just clean up after them," remarked Andy.

Even at the close of the set, after Craig had propelled himself into the drumset, dropped the bass guitar on the floor, twirled his own guitar onto the ground, knocked over the remaining mic stands and left the stage with nothing left to destroy, the roadie dutifully scurried onto the stage to turn off the monitors and pack it all up.

Just as Andy had predicted midway through the set, "He is going to do something before the end of the evening and it is going to be projectile!" Thank goodness for Super-Vines-Roadie.

By the show's end I left itching to listen to the album with a newfound respect for the propensity with which Craig fulfills his rockstar obligation.

And oh yea, I learned my lesson to negate all previous findings when attending a show at the Moore.