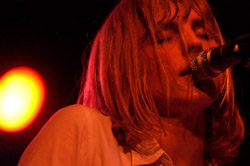 “The Natural History, the French Kicks, Bettie Serveert, the Sights, the Datsuns, Caesars, the Soundtrack of Our Lives, Aerogramme, the Delgados, {*phew*} April 2003”

We were insane. But how could we say no? All these bands were from out-of-town — who knows when we would have gotten another chance to see them? So we crammed in all the shows; we saw, we stopped sleeping, and now, when faced with the daunting task of writing about all of them — we fudged (a little). They all deserved mentions, and they all deserved more attention… but there was only so much we imaginary ones could handle.

Therefore, in an effort to be equitable, we wrote about all the bands — but they each got 100 words only (or as they say on The Price is Right, we needed to come as-close-to-100-words-without-going-over). Those of you familiar with our writing styles recognize what a challenge this was for us.

{In that spirit, please be advised that words strung together with hyphens count as one word in Word®. And who are we to argue with Word?}

The Natural History sounded hot! They sounded… Hot Hot! Okay, they sounded like Hot Hot Heat, with a smidge of Strokes. But — HHH sound like the Strokes, too. Is this a derivative of a derivation? OR — as igLiz wisely noted — does TNH pre-date HHH, who perhaps just luckily got signed first by Sub Sub Pop Pop? Hmm. The trio enthusiastically opened the night for French Kicks and Idlewild, front men Julian and Max Tepper are obviously brothers (“you don’t get hair like that by coincidence,” chimed the posse), and hell, if you’ve gotta resemble a band, HHH’s not too shabby…

The French Kicks went on a shopping spree at the Strokes store. They bought the white low-slung belt and the mussed hair, but tragically forgot to purchase the charisma, the hooks, the sex appeal, and the pop-sensibilities (aisle eight guys, next to the how- to- get- Hollywood- girlfriend- manual!). I have no idea how the French Kicks (or as oui like to say, the Freedom Kicks) got to open for the lusciously-fabulous Idlewild. Their songs left me void, like they weren’t quite done, and I hated Nick’s icky-falsetto. The bass player was cool; he actually looked French. “Right on time, right in line…” Ce qui?

The music that Aidan and Malcolm create sounds just as Glaswegian as you’d expect. The place swooned with each trill as Aidan’s brogue jabbed between the soothing string section parts {thanks to the breathtaking guest female string section}, contemplative guitar strums and Casio drumbeats… melancholic songs broken up by pub-bie self-deprecating witticisms. Whenever I closed my eyes, I felt like I was in the middle of a sad movie… the one where the rain is pounding on the drenched protagonist as he quivers with tears in the deserted park. But the best part was when they played AC/DC‘s “You Shook Me All Night Long.”

Ah ha! Bettie Serveert is a band, not just a woman!! How did I not know that?!? And how had I never heard of this fantastically-skilled Dutch band before? They’ve been around for years, they have all sorts of indie-cred, leader singer Carol Van Dyk (who *is* female) has a sultry, silken, powerful voice fronting a stellar, hook-laden, solid band — there’s nothing to argue about here — they’re tight and clean and cut. Lucky for BS (ooh, unfortunate acronym), other Seattle-ites were far wiser than I; the Croc was packed with a most reputable and uncharacteristically enthusiastic crowd of fans.

One could imagine it would be quite a daunting task to open up for the Datsuns – an act critically acclaimed for their high energy performances and nonstop punches of purist rock. Thank goodness the Sights were chosen for such a mission. Without them, I wouldn’t have gotten what I came for – honest to goodness garage rock nodding to the Zombies and the Jam. They’ve truly earned their tangible ties to their Detroit brethren the Detroit Cobras, Ko and the Knockouts and the Henchmen with their talent to create stunning songs worthy of the grand decibel at which they played.

The Datsuns have- a- solid- case- of- the- emperor’s- new- clothes. This garage-rock band earned incredible indie-hype as the talk of SXSW. “It’s gonna start stinking in here soon,” grinned Liz just-pre-show, gleefully recalling how fellow Kiwis D4 had rocked Graceland. The Datsun’s rocked — sure — but with a little-r, without stench. Liz bemoaned that she didn’t find anyone in the band attractive and truly, I thought they offered nothing innovative that I hadn’t already heard on K102 in South Florida before they went off-the-air in 1986. They just needed eyeliner and hair-mousse. Fellow music-lovers, methinks we’ve been duped. We’re listening to buttrock again… {not that anything’s wrong with that…}

Caesars solidly opened the night for TSOOL with at least 39 minutes of jingling-jangling guitars, dark curly locks, and driving catchy rock-pop bliss. Tragically, many fans missed them, as the bar appeared as full as the showroom {all-ages grumble}, but anticipate their obvious stand-out hit “Jerk it Out” as the lead contender for the pervy-feel-good-favorite-hit-for-summer 2003. A bonus: after the show, we witnessed the most incredible scenster clash between Ben Lashes and Jon Whitney, who both managed to appear at this show as well as the Hint Hint/Divorce show for the one-year anniversary of Chop Suey. Good job, boys!

Mmm, The Soundtrack of Our Lives: we should all be so lucky to live lives that warrant such soundtracks as this: lush, evocative, introspective, textual, swirly and gorgeous — not to mention, filled with hot Swedes and fronted by a gargantuan man-bear with the kindest face and most sweetly expressive voice. The show highlight: after murmuring a bit of Donna Summer’s “Love to Love You Baby,” front man Ebbot “Hagrid” Lundberg requested everyone sit down (which we did), and he walked through the audience, peering curiously at our faces, smiling and singing his way through the crowd — who went crazy. Fantastic!

What I love most about Aereogramme is their name. Some might suggest that they were being frivolous with their use of the alphabet. I say they just got their money’s worth when they were buying vowels. Their latest album, Sleep and Release, paled in comparison to their knack for spelling. But, when I heard their loud, thick monstrous guitar textures divided by sensitive finger-picking and whispers coming from the showroom, I found myself drawn away from my comfortable seat in the restaurant towards the stage lights. Now that I’ve heard them live, their new album isn’t so nondescript.

Oh God, the Delgados. What a fantastic band, what a fantastic show: two violins, one cello, one flute, a bunch of typical rock instruments, and the incredibly otherworldly voice of Emma Pollock just caressing each melody. The uniqueness of her voice first drew us both into the ethereal Delgados web {igLiz with Great Eastern, igDana with their latest release Hate}; live, it was positively breathtaking on songs like “The Light Before We Land,” “Woke From Dreaming,” and “American Trilogy.” Oh God, it was gorgeous. Did you know they’re named after a Spanish cycling champion, Pedro Delgado? Well, now you do…