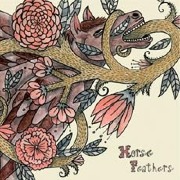 This Portland duo, comprised of songwriter/vocalist/guitarist Justin Ringle and multi-instrumental wunderkind Peter Broderick, is turning heads (and breaking hearts) with its debut album, Words Are Dead. A collection of sparsely beautiful chamber-folk built around Ringle's ghostly whisper of a voice and Broderick's sweeping violin, the record has garnered repeated comparisons to the mellow sounds of Nick Drake, among others.

While Drake's spectral music always seems on the verge of floating into the ether, Horse Feathers traffics in flesh and blood. Songs sigh and moan, build and release — usually on the back of Broderick's gloriously expressive and tastefully understated playing. It's haunting, to be sure, but mostly because the music — like any master painting — manages to capture a fleeting mood and emotion so precisely.

From the opening strains of "Hardwood Floors," it's hard not to fall under Horse Feathers' spell, but a bit of advice: approach listening to Words Are Dead the same way you would a leisurely stroll through the park: take your time and soak it all in or you'll miss the small wonders that abound.

And abound they do. Whether it's the lilting "Finch On Sunday," the spare and understated "In Our Blood," or the galloping "Dustbowl," (which almost sounds like a banjo-fied Decemberists outtake) the songs are shining examples of the art of dynamics and the beauty that an arsenal of instruments (musical saw, violin, viola, mandolin, piano, and cello, among others) can create in the right hands.

While the album title might speak of their demise, Horse Feathers understands that language goes beyond words. At the same time, Ringle proves he's on in the verbal department, delivering wounded lines like "sadness comes in different shades" that match the music and create an impression even greater than the sum of its parts.

With the overwhelming abundance of music being released these days, it's rare to find a young band this immediately gripping, and a record that holds your attention start to finish. Meet Horse Feathers — you'll be friends for a long, long time.