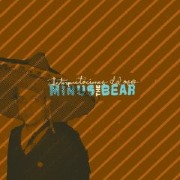 Minus the Bear have gone the remix route. Their latest, Interpretaciones Del Oso, collects the works of 2005's Menos el Oso, as respun by 11 artists as diverse as local eclectronic (like that one?) outfit IQU and Minneapolis rapper P.O.S..

While the result is pleasing — quiet, introspective, jazzy at points — I can't help but ask, simply, why? Why would MTB, the indie darlings so known and loved for their creative melding of catchy dance beats and guitar licks, go this route? Interpretaciones feels like the kind of record a band does to fulfill a record contract: one more release, rehashing old material but taking a new enough turn so that the record company can't complain about recycled material — to say nothing of the fact that this release comes on the heels of Menos, a stout record stacked with good tunes, sure, but not exactly a pop classic that would yet warrant remixing.

Let me step back a bit. I'm not sure "remix" is the right word to use. The press onesheet album calls it that, yet the band themselves have titled this "interpretations," not "remixes." Whatever the label, the fact remains that we've heard these songs before — and in much more pristine, tight form. The 'interpretations' follow closely behind the originals in some cases ("Drilling" by P.O.S.) and are 'loose' to say the least; on others, some tracks remixed so far they're almost unrecognizable to their original state ("This Ain't A Surfin' Movie" by IQU and "El Torrente" by J. Clark of Pretty Girls Make Graves).
<
The release is an experiment in sound. There are beautiful, ambient moments such as the already gorgeous "Pachuca Sunrise," now done up downtempo and sexy, and the groovy "Hooray" (remixed by Yuuki Matthews of Crystal Skulls). But there are also inexplicable moments, remixed and repetitive bits that carry on too long ("Fulfill the Dream" by Tyondai Braxton of Battles).

The Bear are definitely exploring the dance side of their sound (think Daft Punk, Ratatat) rather than bringing forth Dave Knudson's creative, angular guitar work. This is an even stranger move, considering longtime keyboardist Matt Bayles departed last spring to concentrate on the other side of the recording business: producing (he produced Menos). Jake Snider's plaintive vocals are a surprisingly strong match to the electronic beats. But the traditional guitar tones — not this effects peddle-fest — were part of what gave the Bear their charm. With the focus on the electronic, the release sounds more like a computer-geek home studio album, lacking the edgy, warmer, human angle of past records.

Bottom line: Why mess with a good thing?

(The good news is that Minus the Bear are already recording their studio follow-up, Planet of Ice, set to release later this summer.)