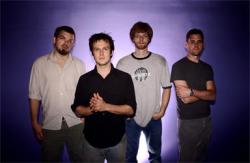 It all started on a dark and stormy night.

The first time I saw the Dismemberment Plan was late 1999, right after the release of Emergency and I. It was one of the best shows I had ever seen and quite possibly still the worst.

When they made it to their tour stop in my small-ish town significantly southwest of Washington D.C., the show's venue turned out to be a dance studio that was trying to turn the tide and start hosting some musical events. The worst part? No shoes were allowed in the studio. Or was the worst part the evening's nasty snow storm that turned to pouring rain. Hmm…

Now insert 150 people who had come with wet feet and freezing hands to hear these kids.

Oh, or was the worst part when DP finally came out to get things started and half of the equipment (from said dance studio) didn't work?

Nope… that was the best part — becAUse after some bizarre electrical work that allowed most of the hookups to work (although the mic line was popping in and out) and some very intense discussion/laughter/break or two, DP determined that it was "all request night" in an attempt to salvage the evening. Sadly, I didn't get too much out of the lyrics that night but the sheer intensity of it was unbelievable.

I review all of that because, four shows and four years later, those guys seem to do whatever it takes to put on a good show — and have a genuinely good time doing it.

Like the first time I saw DP, the Graceland show was also an "all request night" featuring songs primarily from Emergency and I. There were a few from Changes and one from !. As fast paced and story-like as most of their songs are, hats-off to them for even remembering anything from !.

And my favorite best part of the night was when, at the end of the show, I got to hear my favorite question at a DP show – "Where's my pips?" Or was it during "Ice of Boston" when as many people as possible jumped on stage and danced?

These guys have such amazing energy and enthusiasm that you can't help yourself – you have a good time whether you like it or not. I haven't seen such a consistently happy drummer since I saw the drummer for the now-defunct Suitcase playing with his new band.

I could go on and on about this show. At best, I'm mentally rummaging through a night trying to highlight the really great stuff. I forgot some of it and internalized the rest. If you missed the Dismemberment Plan's last show at Graceland, well, you've missed them. They are going to tour on through July in the States, and Europe in August. Then they are done.

Oh and one last thing: the ending of the show. They did a spectrum of Seattle bands cover extravaganza, from The Postal Service to Soundgarden. It was hilarious and relatively well executed and involved even more people on stage — dancing when it was louder, sitting when it was a little quieter, and dancing on monitors with a little pole dancing thrown in for good measure.

And at the very end: me going home quite pleased with myself for having such a good time, also a little sad that it won't happen like that again.