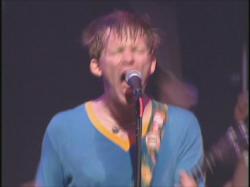 "This song is called 'Fanfare for the Common Man,' and it's for you guys!" declared Peter Parker frontman Matthew Parker.

This song was played in ¾ count, an indie-rock waltz, a distorted, crescendo-ed waltz. It started off a bit plodding, ahhh, then it picked up, and away we go… Wait. Then it was plodding, plus crescendo. Then quieter again. Then… crash! crash! crash! BOOM!!!

I overheard some old guy in the audience say to his friend, "This all sounds like noise to me." Another friend of a friend told me earlier that day that the Block Party never had good music, because, "All they play is grunge." Interestingly, the next song Peter Parker played was titled "The Aesthetic of Dumb." So that was nice.

I like these guys. The guitar sounds clean, the melodies are nice, and they have a chick on bass. You know I dig that. My favorite part of the show (well, as much of the show as I caught) was when I wandered towards the stage. Along the front row, all these cute underaged girls were singing their little hearts out. They knew every word. I just glowed looking at them; I felt wistful for an adolescence I never had. How exciting it must be to adore a local band so much, and to then attend shows at such small venues!

I wish my teenaged friends and I had had such musical abundance, and had been able to see live local music. Instead we went to the mall a lot and listened to classic rock. As I stood there, I grew increasingly thankful for the Vera Project, and contemplated the impact they will have on the region, inspiring budding young musicians. I can't wait to see what these kids are going to grow up to play, with influences like Peter Parker and all the other great local bands on the Vera Stage.