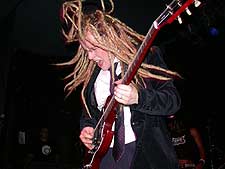 Here's a question: can a cover band transcend its material?

When it comes to Hells Belles, the answer is a resounding YES. Well, I take that back. The answer is, sort of. Allow me to elaborate.

Hells Belles put AC/DC to shame. I'd call it undeniable. Singer Om Johari is sexier, mightier, scarier, bolder and ten times the bad ass that either Bon or Brian could have dreamed to be. And her voice! My God, she has the force of gospel, the shriek of 1000 electric eels, and the power of heaven propelling it. I've never heard it's equal.

And Adrian "Angus" Conner on lead guitar. She dresses like Angus, she dances like Angus… but for the Block Party, she disrobed — and while I've never had the pleasure of intimacy with Angus, I suspect this was one area in which she *greatly* exceeds Angus… And the hundreds of screaming fans in the audience seemed to concur.

So far, sounds like Hells Belles have it all over AC/DC. Well, yes. Here's my issue: in my (ahem) humble opinion, the number of AC/DC songs worth a listen are numbered. In fact, I have numbered them, and there are eight, as indicated below:

Frankly, that's it. Anything else is pretty much crap. So when Hells Belles played an hour and a half long set… well, you can do the math here. You know some songs will be crap. Mind you, this crap sounds far and away astronomically better when Hells Belles perform it… but still, crappy. To me, at least.

I was especially perplexed by the string of crappy AC/DC songs that dominated the first part of the show. You could almost feel the itch in the crowd; when are they gonna play "You Shook Me All Night Long" already? (or perhaps that was just me, as I knew I'd be leaving halfway through to catch Ripley at the Vera Stage. Argh, my exasperation! Song after song I awaited an old favorite, and was let down. Bored bored bored.)

My friend Greg who watched the show with me disagreed. "The whole show is clearly post-modern feminism. Obviously they're just being very picky about the songs they choose," he said.

Then they launched into some crappy song, I'm not sure the exact title, but it proclaimed, "Well honey you can do it. Do it to me all night long!" Post-modern wha..? And besides, don't AC/DC have another song with frighteningly similar lyrics to that? As I said, they have *eight* good songs, and that's it (and no, "Jailbreak" and "Thunderstruck" do not make the list, sorry).

But enough bitching. Luckily, Hells Belles played long enough that I caught most of my favorites after the Ripley show, and they played all the favorites. And Om — that woman belongs in front of a microphone; she's hilarious, she's silly, and she just rocks, even when she's just talking:

(when Angus removed her top)
"This is some PhD titty — this ain't for sophomores." And then… "Angus was hot she had to take off her clothes, hope you don't mind. Then she took them off again…" (at which point Angus, startled, said "What!??")

And before the definitive song, she asked all the ladies to move forward. When that didn't work to her satisfaction, she demanded… "Men, if there's a lady behind you, please switch places." (heehee, short imaginary Dana can totally endorse that). And then, "We won't start until you come up…. You're gonna have to leave your Mom by herself — she's safe." OK, that was a bit spooky, as I had *just* dropped my Mom off at Cafe Vita, exhausted and half-deafened from a day of shows.

Then: Om shook us all night long. Or more exactly, she directed us ladies to shake ourselves; she directed the mic towards the women in front, and had them sing the entire first half of the song. Beautiful. I loved it. It doesn't matter how many times I hear it, or how many other new and more innovative bands I hear as I get older, I will always love those old AC/DC classics. We all will.

OmiGOD, did any of you guys see the Button Guy at the Hells Belles show?? Well, I had a chance to talk with him, and to take a few photos to share. This man has worshipped AC/DC since the early 80's, has toured with them, and wears this blue blazer bearing more than *1000* AC/DC buttons. Intrigued? Horrified? Read on…

Josh the Button Guy is the world's biggest AC/DC fan. "Angus Young signed my tour program: To Josh #1 Fan," he told me. And you know what? I'm not arguing with him.

"I had AC/DC carved in my head for 13 shows," he said, showing me photos of a younger version of himself, ensconsced within a homemade button. His eyes feverish, his tone frenetic, he could hardly contain his enthusiasm for AC/DC, for Hells Belles. So he told me all about it. In gushes.

He has toured with AC/DC through Australia, and even had his photo in their tour booklet. Back in 1983, he saw them catch the Tacoma Dome on fire. He appeared with them on MTV (in the same blue and buttoned blazer). This guy is hard core.

Oh — according to Josh, this was Hells Belles last performance. I checked on their web site, and it did seem to substantiate this claim. "I don't want them to quit," he declared. "But TNT was their last set. FOR THOSE ABOUT TO ROCK!"

(I'm serious, he really did say just that, in conversation, complete with hand gestures. He breathes AC/DC.)

He's just a sweet guy with an addiction to AC/DC and a huge appreciation for Hells Belles. He also has a fan site at http://groups.yahoo.com/group/buttonmans_acdc_army/, called "BUTTONMANS AC/DC ARMY." Perhaps now that we're without the service of the Belles, this is a place to turn for solace. And ROCK.