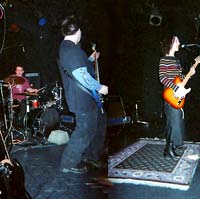 Scottish Men of Science, with Ripley

I must admit that I was a bit nervous going to see Men of Science. I’ve known Pete Hilgendorf and Ben Heege for quite a while and you know how when you go to see a friend’s band play you hope that they don’t suck because if they do, what are you going to say to them after the show? Um, nice lights?

Once they hit the third song mark of their set, I was dancing along, smiling with anticipation of their next song and relieved that my boys have written a set of rockin’ songs.

There is a distinct Replacements flavor (it has been so long since I have heard any one even attempt it from that direction, let alone do it so well) with catchy chord progressions and sweet-boy-next-door lyrics. Can you believe it has taken this long for someone to write a song about "pretty girls talking on cell phones on the West Seattle bridge?"

Pete and Ben totally impressed me with their abilities to swap guitar, bass, and lead vocal duties as they floated from song to lovely song. Reminds me of an idea my friends had a few years back for a concept band called "Chinese Firedrill." Here's what we were gonna do: we decided to assign a lucky audience member a piercingly loud whistle just before the set started. Then, at any given time during the show, said lucky audience member could blow the whistle, at which time we band members would scream "CHINESE FIREDRILL!!" into our microphones, drop our instruments, scramble to the spot to our left, pick up the instrument, and continue with the song wherever it left off.

Much hilarity would ensue. Of course, then we remembered that none of us can play any instruments, so we had to can the idea. But maybe Men of Science could use it!

I really liked them — and I'm not just saying that because I might ask them to do my peer-performance review at work next quarter. In hindsight, I think I saw more co-workers there than at the last company picnic.

Yeah, I really liked them as well. I must admit a slight preference to Pete's voice: it wasn't as clean as Ben's, but had a lovely soft-scratchiness to it that provided nice texture in the tunes.

Mark your calendars, they are playing next week on Thursday August 8 at the Industrial Cafe (in Georgetown) with Sugartown.

I just saw Ripley play at the Capitol Hill Block Party last weekend, so I wasn't expecting anything too novel when I went to this show. Wrong!

I can't exactly explain why, but this band just sounds so good in the dark confines of a smokey bar. The guitar sounds grindier, the vocals sound lusher… and the band members look sexier. Was their new guitar player Mike that hot on Saturday? How did I not notice?

Are you telling me you saw him at the Block Party and you didn't take note?

Yes. I must have been suffering from momentary heat-stroke. But now, in the dark, in the smokey confines of the Sit N Spin… tasty! My God, what eye candy!

As the night went on, his on-stage banter with JessieSK just got cuter, in an unassuming, skinny alt-rock boy sort of way.

It's such a shame. But that does force us to concentrate more on the music now. I read your Ripley review from the Block Party, and if I may quote you, you said, "Ripley is oft-compared to Throwing Muses…. And you know, I didn't find the comparison apt." But I gotta tell you: I heard Throwing Muses.

Hah! Well, either way, can you go wrong here?