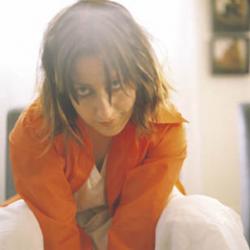 I am not a fan of EMP's Sky Church as a show venue. It's too perfect, too pristine, designed for comfort and convenience more than experience — it's name, ironically, notwithstanding. Sure I can appreciate the lack of smoke… the early (and on-time) show performances, and the immaculate (and not too loud) sound. But it's all so sterile, so polished, so lacking in fire and quirk that I frequently find myself distracted from the show by the lack of ambiance. It's a rock venue without fire.

But Carrie Akre held her CD release party there, so I wasn't going to let my dislike of the venue dissuade me from attending. Carrie Akre, former singer for Hammerbox and Goodness, two of the defining bands from my early years in Seattle… of course I would attend. Especially since rumor had it that Carrie would be joined by former Hammerbox bandmate Harris Thurmond to play some old Hammerbox classics.

I got there just before 10, sadly missing Orbiter (did I say I appreciated the early and on-time show starts at EMP? I rescind; strike that, reverse it.). Carrie came on as planned just after 10, taking the stage with her six member back-up band (including brother Eric Akre on drums, aww). The show began with a wacka-wacka funk instrumental funk beat that I swear was the theme song to "Shaft"… and then Carrie began to sing.

God, her voice. It resonated, it warbled, it reverberated and it boomed and it soared. No one else sounds like Carrie Akre. Have I compared others to her sound in past reviews? Ahh, they were pale comparisons, mere echos of her command.

But this music? It was so… sophisticated. It was clean and cheery. It was positively adult comtemporary. Dare I say it? (I do)… It was mountain fresh even, complete with an annoying backup singer and dancer, a horn player, and a coordinated light show.

Um… Carrie? It was disconcerting to hear Carrie's oh-so-distinct "hey heah heeey hey" vocal stylings over this mellow and polished music. It was odd to see men in short-sleeved tucked-in silk shirts and pleated Dockers set to that voice, that gorgeous voice, that carried me through endless Goodness shows all over the Pacific Northwest a few years back. But there it was. Carrie Akre, adult-compemporary goddess, not Goodness.

Not that there's necessarily anything wrong with that. I guess. The songs were strong (if you like that sort of thing), and she still has amazing charm and charisma and a phenomenonal stage presence. The crowd loved her. I can't possibly put-down Carrie Akre; I adore her too much, even if what I love is now filed away under "nostalgia."

Whether or not this was my thing, it was certainly hers. She was obviously in love with each song, embracing it, caressing each note with her voice as she issued it forth to the audience, each syllable a gift. After she received an enthusiastic burst of applause, she told us, "Thanks for the applause. You scared the hell outta me." And it's no wonder; she's so entranced while playing, she likely literally forgot we were there.

"Hope, won't you come out and play me, save me
Hope won't you rest my eyes
Today….
Hope, roll me on over with the back of your hand."

The stage was darker, the guitar more intense, and the hokey-sounding trumpet, not present. The metaphor was lovely, honest, bittersweet, pained… I far prefered her simpler songs like this one, that focused more on her voice. This feels like a better "adult" direction than the so-called adult pop contempory songs.

Then came the biggest highlight the moment we (speaking in the personal collective sense of we, at least) were waiting upon: Harris joined her onstage, and we got to hear a couple of Hammerbox songs, "Edge of the Moon" and "When Three is Two." Harris' guitar cut out a few times, and Carrie joked, "Just like old times."

Surely I don't need to sing the praises of Hammerbox, do I? And even if I did, what difference would it make? They're gone, they're done… and while it was nice to hear those couple of old favorites, it just made me feel a little old and a lot of longing for a time gone by.

It's obvious that musicians shouldn't aim to stagnate. But I wasn't prepared to feel like the Hammerbox/Goodness days were so long gone by… or perhaps, I just wasn't fond of the music that has come up in its stead.

Carrie started playing more songs off the new CD after Harris left the stage, but it just made rock and roll Carrie seem even further away.

So I left. I left the adult contemporary tunes, I left the sterile and non-smoked filled hallway of the Sky Church, and headed to Linda's Tavern, the Hammerbox nostaliga buzz still burning fresh in my head…