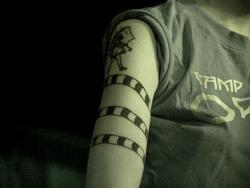 During the first song, I found the sound a little too soft, and the traffic noises a bit too distracting. Carissa's Wierd have a sound so gentle that it doesn't translate well to a non-optimal sound setting. I needed to be enveloped in that magical grace that Carissa's Wierd creates… and because of this, background noises were jarring, traffic horns, abrasive. Even the crackle as I turned the pages in my notebook echoed loudly in my ears. When the band paused after the first song, the applause just burst forth. It was like people have been yearning for a chance to express gratitude to this amazing band. And CW responded in kind. Their sound got louder and less timid… and purrr…. we all got sucked into that lushly brooding CW vortex.

The audience was transfixed for the next 40 minutes, as we listened to them present the songs from their third release, Songs About Leaving.

I don't even understand how Carissa's Wierd could sound more sublime than their last album… but here it is for all to hear. They've retained every bit of their subtlety, their honest fragility, their humble ability to convey and evoke incredibly tender pains and particulars… and yet, they sound so much stronger and confident. They're still stepping forward gently and painstakingly, but they're so much more sure-footed than ever before. The addition of a bass guitar and a stronger drum has fortified their structure without sacrificing any of their delicacy.

And you know, I think they may know it. While part of Carissa's Wierd's charm lies in their self-effacing presence, it was nice to see them smiling, and even addressing the audience. "Thanks to all you people for coming out to see us tonight," said Mat Brooke, CW vocalist and acoustic guitar player. I think that's the longest utterance I've ever heard him say. Pure banter, by CW standards! They just possess such a quite and quiet elegance. They're music envelopes so it nearly coats, not in a sticky or cloying way, but like a warmth and a comfort. It's translucent and soothing, cradling. Damnit, it's evoking all these poetic words, but no poetry for me. It's just exquisite. Sarah Standard's violin is so fucking beautiful, you could cry.

I think I did cry.