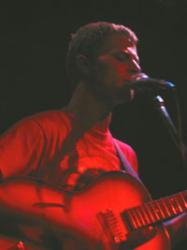 Argo has been on our imaginary radar for some time now. We keep encountering Justin Benson and Matt Benham all over town, from shows to karaoke nights to more shows.

Normally I would clarify which instrument each band member plays {i.e., Justin Benson (guitarist)}; however, in the case of Argo, I can't, because they all play ALL THE INSTRUMENTS. They have taken the art of the Chinese Firedrill and taken it to raging new levels. Between these two boys and band mate Scott Leonard, they play guitar, drums, piano, xylophone (!), and sing. The only exception was the bass player, Jason Dean (who, incidentally, just joined the band a week earlier! So he's forgiven.)

We've been awaiting the opportunity to see them perform live, which we finally got at I-Spy when we saw them open for Lila and Asahi.

The diversity of talent in such a young band was astonishing. It's hard to comment on their all-around sound, as each song was a new adventure. There was a freshness about their approach to music, a certain joy in its expression, that was a joy to watch.

In the words of Ollie Byrd (Yeek Yak Airforce), "I really like Argo. They have a naiveté and purity that is very rare. You can sense a real sincerity in their playing."

{hey, we quoted what Argo thought about Yeek Yak Airforce a few months back; turn-around is fair play, right…?}

This was a lot more than I was expecting. It's beautiful — they are sophisticated beyond their young years.

I definitely had a preference for the lyrics and vocals of Justin Benson, likely because his songs were the most 'melodic rock' of the bunch, with a gorgeous piano (a Fender Rhodes producing a wonderful classically retro look and sound), a gently forward-moving quality, a clear clear vocal, and catchy verses:

The exciting news: Argo were heading in to record their first album the weekend after the show… and with Jon Auer, (Posies) no less! I anticipate the next big show will be a CD release party (or perhaps, that is my request…)