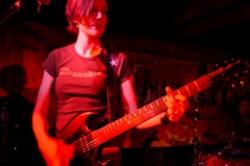 The theme of the week was to see all bands with cool names, so what better time to catch local band Vegas in Flames, and for their CD release, no less.

Plus — it wasn't just Vegas in Flames, but rather a showcase for Unsmashable Records, a local label featuring the Riffbrokers and the Small Change, two other bands with good names and even better sounds! And vegetarian biscuits and gravy! And raffles!!! We're really good at raffles!! Just ask Subpop {and now, Heather from the Riffbrokers} how good we are at raffles!

Let's put it this way — we're as good at raffles as I appear to be with exclamation points!!!!!!!

We won all three CDs, and I won a t-shirt.

But enough about loot. Vegas in Flames. The band is fronted by a husband and wife duo {and a really attractive one at that!}. Jon and Heather Croft both sing and play guitar. While the two have played out in Seattle for a number of years seperately, Vegas in Flames features their first joint musical debut, along with fellow band members Art Behrman {an in-law}, and Andy Salzmanwith {no relation}. Their debut release Despite the World offers competent, moody guitar-driven indie-rock with an energetic grit and familiar ring, which translated well to our debut VIF live experience.

They also have awesome t-shirts.

Following VIF, we got a delightful earful of the Riffbrokers sharp jangling rock {and biscuits}, followed by the piercing pop stylings of the Small Change {and biscuits} to round out a great lineup.

Don't miss an Unsmashable Records show — and I'm not saying that just because of Heather's home cookin' {Mmmm…. nummy veggie biscuits and gravy}.

The music is fun, the people are… funner, and now we've added Vegas in Flames to our list of awesome band folks to know. And we got to use lots of exclamation points!!!