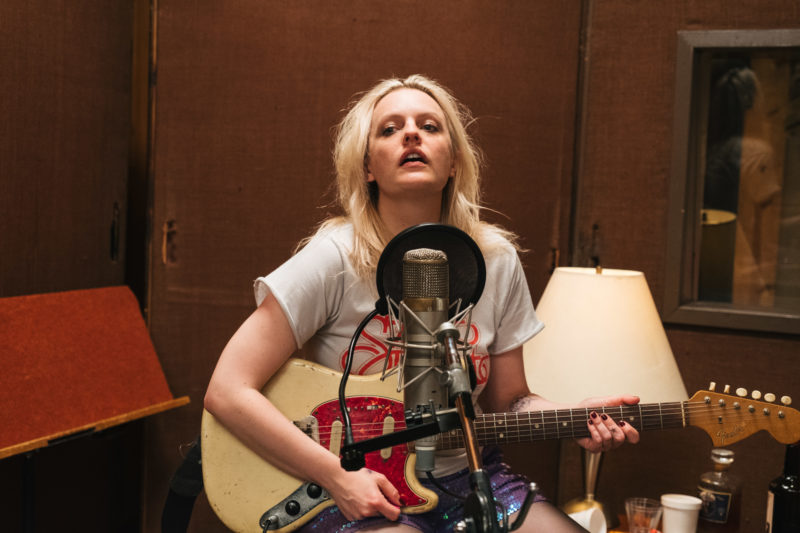 It still feels rare and precious to see a movie that is headlined by a complex female lead and Elisabeth Moss CRUSHES that part in Her Smell as Becky Something, a ‘90s-era superstar who emotionally implodes at the height of fame, taking everyone around her out as she cannonballs towards her bottom.

Told in five acts separated by home movies of happier times, Her Smell starts by showing us Becky’s manic behavior backstage after playing a show with her three-piece band, Something She. Becky is high on various substances; running from room to room and alternately conducting ceremonies with her spiritual guide; yelling at her ex, Danny (Dan Stevens), and terrorizing his new girlfriend; cooing at her infant daughter; and screaming at her bandmates.

Everyone around Becky is obviously exhausted by her increasingly erratic behavior, but they put up with it because she’s a genius hitmaker who draws crowds with her music and her give-no-fucks-punk-rock stage persona. The problem is that the real Rebecca has lived as “Becky Something” for so long that she’s lost who she really is — and when she hits bottom, she hits it HARD.

Moss is so fantastically expressive that we see every moment of Becky’s ups and downs play out on her face. One of my favorite scenes is in the recording studio, with Perry keeping the camera tight on Becky as she listens to her protégées perform and realizes not only how good they are, but that she can be replaced by them.

The film ramps up the intensity in each frenetic act and culminates in some serious emotional wreckage, and then brings us through that to a more quiet resolution. Perry does an AMAZING job here making you question what you’re seeing, and leaving you wondering how it will all turn out until the very last frame.

Moss is supported by an equally great cast: Agyness Deyn and Gayle Rankin are fantastic as her bandmates — and shout-out to Eric Stolz, who is spot-on as record label owner and manager Howard Goodman, enabling Becky by appeasing her and then denying any part in her downfall once she breaks. Virginia Madsen is also great as Becky’s frustrated mother.

The stellar acting is paired with some amazing tunes written by Alicia Bognanno from Bully for Becky’s band and The Akergirls that somehow sound vintage and modern at the same time. They marry perfectly with the deep, dark score by Keegan DeWitt — so I was pretty stoked to see that the vinyl will be available from Waxwork Records.

I can already tell this is going to be one of my favorite movies of the year, and I can’t wait to see it again.

One more note: make sure you stay through the credits to see a series of great faux album covers! I would buy ALL of them if they were real (well, TBH, might skip Zelda’s).

{Her Smell opens in Seattle Friday, May 5 and is screening at the SIFF Film Center}