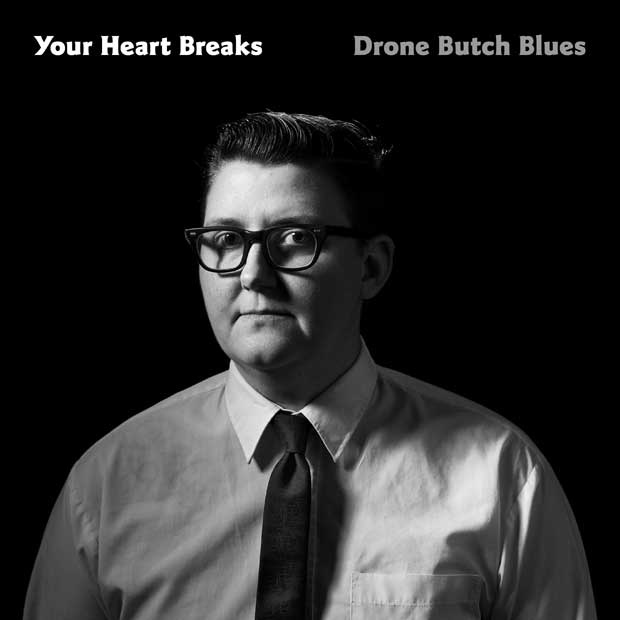 Clyde Petersen is a Seattle treasure. Over the course of 20 years, nine albums, and countless shows and films, Clyde has earned the title of Indie Folk Hero thanks to an astonishing CV with credits ranging from film producer, writer, director, animator, visual artist, indie rock musician (Your Heart Breaks), and at least five other job titles I’ve missed. I’m pretty sure the mission statement on his resume is: Be awesome, all the time. He takes DIY to a whole other level by not only creating and inspiring others with his art, but by crafting a welcoming, all-inclusive scene which helps others thrive in Seattle.

This is all to say, it’s never a dull moment when Clyde’s in the mix – and that’s why we are excited to share an exclusive listen to the entire new Your Heart Breaks album and a new music video with you!

Your Heart Breaks’ new album, Drone Butch Blues, released in April 2019 on Sofaburn Records (buy it!). It’s a queer concept album based on the writings of historic and contemporary GLBTQI authors. It’s self-described as an “acoustic queer folk drone” album. I’m always down with new sub-genres and hope there are more entries in this one. It’s quiet and crushing with an captivating backbeat.

[quote]”With a focus on stories surrounding queer community, Drone Butch Blues touches on topics of secret and forbidden love, sex with strangers, the lives of hustlers, the impact of AIDS on homosexuals, historic events and rebellion all interwoven with the personal narrative of Clyde Petersen. Striving to examine the contemporary gap between generations of queers and their elders, Petersen turns to written materials to find buried remnants of gay culture and creative vibrant humans, lost to the plague of AIDS. What emerges from this exploration is Drone Butch Blues, the 9th full-length album from a twenty-year career as Your Heart Breaks.”[/quote]

Hear other familiar voices on the album? You probably recognize one of the special guests that appear in the line up, including but not limited to: Karl Blau (K Records), Kelley Deal (The Breeders), and Kimya Dawson (Moldy Peaches).

And that’s not all!!! Clyde also shared a new video! He explains:

[quote]”I shot this music video in New Your City with my friend Jeffrey. I met him years ago at a show in Hoboken on a tour with Kimya Dawson. He was a teenager then and a young poet. We became friends over the years and he eventually came out to me and started having boyfriends. Now he lives in the city and studies Creative Writing and writes poetry. The song is a letter to him. He was kind enough to come adventuring through the lower east side with me and let me make a music video about him. Since the entire album is primarily based off of written texts surrounding New York City LGBTQ culture throughout the decades, it seems fitting to have a new song about a new generation of queer folks in the NYC.”[/quote]

I know, right? There’s a reason that Clyde has won every worthy award in Seattle (Neddy at Cornish Award and the Stranger Genius Award, just to name a couple).

Ready to hit the road? Your Heart Breaks is on tour with Nana Grizol and Loamlands to celebrate the release of the new album!