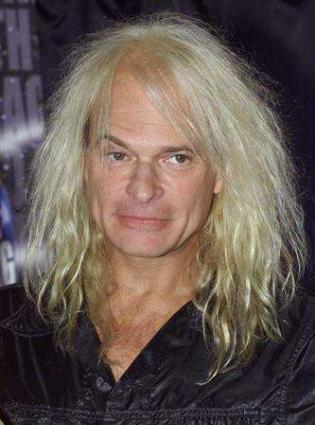 ….Wolfgang Van Halen can suck it!

As much of a Roth-versus-Hager girl as I've always been, you can't call it a reunion when they rather uncermoniously chucked Michael Anthony out of the band. Not only is that completely uncool, but I also shudder to think of what those VH classics will sound like without Anthony's amazing backing vocals (and of course, his stellar bass-playing).

And speaking of shudders, how can any expect to see this man…

… to pull off the performance, moves, and of course, SPANDEX of his glory days?!!?!

It's not that I don't think older performers lose their validity — quite the contrary, with some performers. But David Lee Roth was never exactly a musician; he was a showman, an acrobat, a party-animal, and Van Halen propelled to fame in large part thanks to his raw, ballsy sex-appeal. Attempting a comeback now, with Roth balding and well into his 50's? That's just sad, sad, sad, especially at between 50-150 smackers per ticket. What are people hoping to see, 20+ years later?

But then, our nostalgia-laden show-going culture never fails to amaze me.