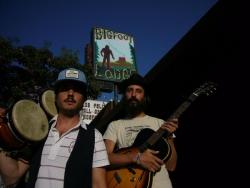 Herman Dune at the Tractor Tavern

Herman Dune played to a half full Tractor Tavern Sunday night. I feel bad for the half who didn’t show up. I mean, yeah it was a Sunday night, but it was an early show and it was only ten bucks, talk about a steal. I suppose it’s my fault for not informing you that the show was even taking place; my sincere apologies, I promise I’ll do better next time.

If you’ve never heard of Herman Dune, let me explain. They’re two guys from France, who’ve been around the last 10 years with EPs and albums. Their last album Next Year in Zion was released last fall. If you hear a song on KEXP that’s upbeat, with drums you can’t resist, a distinct voice, smart lyrics, and it makes you want to just drive down the road, bob your head and wave at people; it’s probably them.

The lead singer started the set off alone on stage singing and playing his guitar, the audience fell silent. It reminded me of the silence Damien Jurado draws from his crowds, awe and respect I suppose. I was surprised and delighted by this. Then the drummer joined him on stage for the third song providing the vigorous drums making everyone shake a little. The dancing continued on from there.

They introduced themselves as David-Ivar Ya Ya Herman Dune and Neman Herman Dune. Ya Ya is the singer, and it turns out he also plays a mean guitar and ukulele, and bares a slight resemblance to Frank Zappa. Neman, the other half, who was dressed in a suit, looking innocent as hell, plays the drums with sticks, mallets, maracas, and brushes while holding on to jingle bells. He also showed us on a few songs that he dominates the bongo drums.  Really, he kills them. They played dance songs, and slow songs, most of them ultimately little love ditties. For being only two men they certainly can make a lot of pretty noise.

Half way through the set they jammed on one song, with Ya Ya tearing up the guitar, and Neman thrashing the drums. To be honest, I didn’t know they had it in them, but apparently they do, and they do it well. They told us they were going to Portland next and that we should all go down there with them. They also dedicated a song to Kimya Dawson, an old friend of theirs (Also married to opening act Angelo Spencer), who I spotted amongst the crowd before they went on.

Herman Dune played for a little over an hour, with a mini encore.  They played about 15 songs including “Try to Think About Me,” “My Home Is Nowhere Without You,” and “I Wish I Could See You Soon.” At the end of the night, I think if they would've had a bus waiting for us, most of us would have piled in and went to Portland with them.  I’m not kidding.