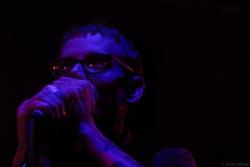 Marc Bianchi, the man behind {and in front of} Her Space Holiday is a walking, talking, barely-singing dichotomy; It's apparent in his music, stage presence and demeanor. I even felt conflicted even while I was watching him. Was I watching fictional character sketch or a man on the verge of a breakdown?

As imaginarily documented before, I've had a longstanding relationship with HSH's recent release "The Young Machines." The lyrics of each track feel so autobiographical that there is an automatic curiosity for the man behind the pen… and the guitar… and the synthesizer… and the microphone. It takes a lot of self-confidence to go down the path of creating an album so laden with self-disclosure… and yet the man behind the project has permanently branded "UGLY" across his knuckles.

The devastating lyrics are surrounded by aural-rich layers of backbeats and stringed instruments. The beats are danceable and if you didn't understand English, you might think that he was singing about benign activities like grocery shopping or going out partying on a Saturday night, not about his ex-girlfriend marrying his best friend or the death of his grandmother. In true HSH form, even his lyrics contradict themselves. During "The Luxury of Loneliness" Marc chanted "I'm forcing her to leave. And she's the better half of me But it's all right. Now I'm scared of this world. And falling for another girl. But it's all right." The soft spoken vocals are unassuming, and for the most part, feel untrained. Together they create a gorgeous weapon to pull me apart.

Live, Marc Bianchi proved to be just as interesting to watch as he is to listen to. A thin, weathered soul with a body masked in tattoos. He shielded his eyes with black rimmed glasses and barely interacted with the audience. It is strange that a man who exposes his personal diary on an album seems to take such great care in putting a barrier between him and his audience.

Although Marc was not alone on stage (he was accompanied by a drummer and bass player), he remained the main focus. His singing was breathy and confessional, almost as if he's unknowingly talking in his sleep. Although I was surrounded by a crowd of fellow-showgoers, I felt guilty for listening, like I was overhearing something personal not for my ears. Some artists appeal to the masses because they make the listener feel they are singing the song directly to them. Marc makes the listener feel as if he wrote these songs for himself as a method of working some internal things out.

This public reading of private diary entries to a crowd was reminiscent of a shared 25-cent peep show to an audience that didn't know what to do with themselves. Should we betray all instincts and clap, admitting we were watching the intimate display of emotions? Do we find a dark corner to hide and watch?

The public confessions (the setlist) brought together both new and old parts of the catalogue, yet it was easy to distinguish between the two. Each point in the HSH timelines is marked by a different and unique sound. If his songwriting is a personal biography of his life, The Young Machines is a bookmark for a dark tragic sequence in Marc's life; Darker than the darkest chocolate, it's so delectable and distinct that you get cravings for it, though it isn't something you should indulge in too often.

The show was a mass of bittersweet decadence. More than merely delightful, it was a memorable night of tragic yet cathartic indulgence that gave me a renewed appreciation for the album.

Want a free show? Check out this super rad video {click on >LAUNCH PROJECT} to one of Her Space Holiday's songs. It's like an iPod commercial, but prettier.