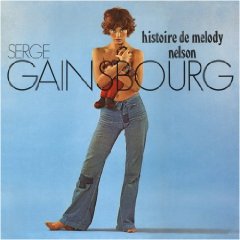 Seattle's exceptionally cool Light in the Attic Records has wisely released another long lost classic. This time, it is one by the relatively unknown French icon, Serge Gainsbourg. The album, Histoire de Melody Nelson, was originally released in 1971. The reissue CD (which is also available on LP) has been lovingly remastered and comes with a tome of a booklet that includes generous footnotes, historical information and lyrics in both French and English.

Gainsbourg has gone on to achieve cult status in Europe, but has remained under the radar in the United States. I can't figure out why. This album is truly stellar. It seems if his lyrics were sung in English that this would have been rather popular in the US. The music recalls Can, Pink Floyd, the Bad Seeds and Sonic Youth. Yes, this is quite an impressive range.

The first track, "Melody," is seven and a half minutes of some of the grooviest bass playing that I have ever heard. On top of this, there are jazzy drums and garage guitar playing that gel together extremely well. Gainsbourg's vocals are spoken over the funky musical accompaniment with an enviable smoothness where one can practically smell the brandy on his breath.

From this point on, the brief twenty-eight minute album winds through some incredible songs that often include orchestral arrangements. The heavy inclusion of strings often taints albums or songs by other artists, but on this record it sounds completely natural. "Valse de Melody" is an example of schmaltz that still feels absolutely right in this context. There are also tracks here that feature no strings at all and that is partly why the orchestra works on this album.

"L'Hotel Particulier" combines the funkiness of the performing band and the lavishness of the string arrangement with impressive ease. Once again, the production of the bass guitar here is amazing. Hypnotically, it leads the other instruments while Gainsbourg plainly delivers his lines just as confidently as Leonard Cohen ever has. The disc's finale is "Cargo Culte," another standout featuring incendiary wandering bass lines, grimy guitars and a hauntingly cinematic backing chorus. The crescendo near the end of the song is something out of this world.

In the press release from Light in the Attic Records, there is a line stating that this is “an essential album for the discerning music lover.” I don’t think that I could have summed it up any better. Histoire de Melody Nelson is a true masterpiece. The album is absolutely stunning and the recording sounds incredible. How the fuck did this one ever slip through the cracks?