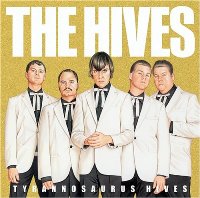 The roaring Hives are back! The Swedish five-piece that stormed the revival of the garage rock movement like a ball of fire — claiming to be the most important of all the bands in that genre — have another album out, and thus another chance at proving their words to be good. So far they're doing well.

Their latest effort, Tyrannosaurus Hives — their first on a major label — is finely polished, but in a way that lets the band's raw edges shine through. They kick into high gear with the first track, unrelenting with their pace and intensity until the conclusion of the disc.

Tyrannosaurus Hives radiates one hit after the next. The band is 'on' all the time: perfectly tight, harmonized and mixed. Singer Howlin' Pelle Almqvist's scratchy shrieks, his voice cracking at least once on every song, are a natural fit to the crunchy garage rock. You can feel the energy coursing through the tracks — envision Pelle strutting around the stage almost as though you were at a live show rather than listening to a recorded album (see TIG's review of the most recent Seattle performance, below!). Tyrannosaurus Hives vaults The Hives to the top of their game, and the album could go on to be one of the best of 2004.

The band howls, thwacks, rallies through the disc. "Abra Cadaver" throttles up to open the album, followed by the impulsive jam of "Two-Timing Touch and Broken Bones" (though I could swear Pelle utters something about "monkey balls" in that one, the lyrics tell me differently). "Walk Idiot Walk," the first single off the record, has one of the catchiest riffs in years. It's a true Stones tribute, but there's never anything wrong with that. "A Little More For Little You" is danceable with a guitar treatment that Peter Frampton would love (or sue over — it's pretty darn close to the distinctive "Show Me the Way" line). "Diabolic Scheme" presents the only departure from the fast-tempo structure: it is a slow dirge in comparison with the pace of the others. Crazed strings and darkness permeate this track-the closest thing we'll probably ever hear to a ballad from The Hives.

There is much speculation as to just where The Hives originated. Are they a "formed band" or not? Is there truly a mystery guy who, a decade ago, sent each of the members a fateful letter, telling them to show up at a specific location and they would become the biggest punk band in the world? Or is this all a marketing ploy?

A little history: The band, Almqvist, Vigilante Carlstroem (guitar), Dr. Matt Destruction (bass), Chris Dangerous (drums) and Nicholaus Arson (guitar), was reportedly put together back in 1993 by Randy Fitzsimmons, a guru who helped create the look and sound that is The Hives. Let's call him "imaginary Randy." According to the band's bio, the summoned guys even had to learn instruments — after making it into the band. They are, if you will believe their press, a hipster version of the Backstreet Boys. Truth be told, they don't even write their own songs (imaginary Randy reportedly handles these duties, too).

The music aficionado in me — the one who is vocally against 'performers' who call themselves 'musicians' — screams mightily at this fact. But I cannot deny how incredibly good they are. When the music comes on, my tapping toes hardly care that someone else wrote the songs or that these five were handpicked from a prodigal lineup of aspiring rockers.

Which brings me, and I'm sure countless of other Hives fans, to wonder: is this story for real? Or is it part of the schtick? The Hives exude egotism — so much so that it seems improbable that they would stoop to the level of having someone else write their songs. At the same time, like most bands, wouldn't The Hives profess their brilliant songwriting ability if indeed they really penned the tunes? So what gives? (And an imaginary aside: so many bands are founded by two brothers. If The Hives were "formed," what are the odds that imaginary Randy would have selected both Pelle and bro Nicholaus Arson for the lineup? Not counting the Knight brothers from my middle-school crush NKOTB, I say the chances are slim.)

Whatever the case, The Hives have perfected the 1960s garage sound for the 21st century. And even if they do turn out to truly be a 'formed' band (gasp!) — they still rock.