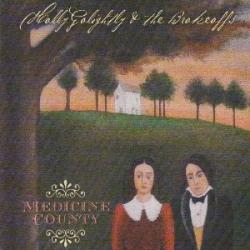 Holly Golightly and The Brokeoffs

Holly Golightly & The Brokeoffs list among their inspirations “bourbon, brisket, ribs, Leadbelly, Howlin’ Wolf …” Well, you can stop right there. It’s easy to confess those sublime pleasures, and a tall, head-walloping order to compare yourself to things that are so smooth and kicking, spicy and filling, and just as cool as they are carnal. SPIN’s tag of calling the eponymous lead woman the “UK queen of garage-rock soul” is also a weighty and potentially wonderful one, but how does “Lawyer Dave” and her band’s new album Medicine County hold up to such an honoring description?

Turns out pretty well, from the two openers, a toe-tapping smooth rootsopolitan “Forget It” and almost White Stripes-grit stomp of “Two Left Feet.” But I found both of these tracks pretty resistible, and actually didn’t know this Ms. Golightly and her Brokeoffs had a three record pedigree from Sympathy for the Record Industry (currently about to be reissued). I figured the name of the artist was a pretty audacious one to front a new band with, but that’s sort of my point: She’s bold because she’s been around long enough to call herself that, and her songs and the band’s music is fresh and vital enough to make me think this was a debut by some new American kids on the scene who had discovered the Harry Smith collection and had some talent to put a blood and BBQ-drenched red, white, and blue opus over.

It’s in the meat that Medicine County tastes best, starting with the title track, a third song about needing chemical oblivion and not getting any. Then Golightly rises from rueful ingenue to a prowling, possibly dangerous femme fatale on “I Can’t Lose,” sweetly crooning “I might break you” to a winding fiddle line you won’t drown out of your head even after a few shots of Kentucky. “Murder In My Mind” brings up knives in the spleen and back alley revenge, bringing up a “Boots Are Made For Walkin'” Lee Hazelwood vibe as Golightly and Dave plan some uber-violence on a nosy fink. Three deep cuts and I’m properly damaged by Medicine County.

That last track is a Wreckless Eric song actually, and with eight originals alongside it and a couple of old time nuggets (“Blood On The Saddle,” “Jack O’Diamonds”) Holly Golightly & The Brokeoffs show just as much good taste in outside material as they do in crafting crunchy new barroom anthems full of love bites and brawls. Great stuff, and I have the feeling she is going to seduce, gaslight, and goose the crowd when they play live in Seattle soon during their long-ass tour of the States.