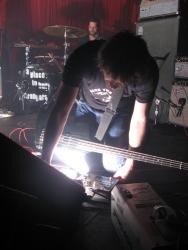 Techno-electronica duo Holy Fuck hit my music radar a couple of months ago and I’ve been looking forward to catching them live since. Hailing from Toronto, Holy Fuck just finished touring with Super Furry Animals and are now on the road with A Place to Bury Strangers. I had missed their show in Seattle in early February so I was uber-excited when they joined the lineup with A Place to Bury Strangers and The Purrs at Chop Suey — a show originally booked into The Crocodile (RIP).

Holy Fuck indeed: they hella lived up to the name! Fronted by Brian Borcherdt and Graham Walsh, Holy Fuck’s performance ensemble included a drummer, a guitarist, and loads of hi- and lo-fi gadgets to produce a fresh blend of rock and electronica. And successfully crossing those genres. They stand out from others on that playground by bringing speed metal riffs, hard-hitting beats, and tweaky electronic noise to produce a plush and substantive sound which is just as terrific live as it is on their self-titled 2007 LP.

Strong beats, close coordination of gadget wizardry, and joyful play inspired the typically dance-reticent Seattle audience to bust a move. Borcherdt’s and Walsh’s enthusiasm were infectious. Even those who were primarily there to see A Place to Bury Strangers were engaged and bouncing along. The place went crazy when Borcherdt pulled some kind of tape or film through a mechanical gizmo to produce a sound unlike anything you can get from a board. A natural foley artist, that one.

Holy Fuck could see a breakout year in 2008 if they keep bringing their mad skillz to live performances.

A Place to Bury Strangers are a three-piece group from Brooklyn with a reputation being louder than the devil and using more pedals than god. The show was loud, but not extraordinarily so. And while they brought plenty of knobby goodness for the floor, it was more of the hand-twisting variety than foot pedal.

But no matter. A Place to Bury Strangers played solidly-textured music for 45 minutes and got the mixed crowd of shoe-gazers and experimentalists nodding heads. Curiously, the lighting was nearly non-existent for most of the set, which seemed a little artificial to this new listener. It wasn’t until the strobe lights kicked in that the audience went a little crazy — as did the band: tearing strings off the guitar and getting down on the floor to tweak out muscular noise. Good stuff.

Seattle band The Purrs opened the show to a half-full crowd. They achieved the trifecta of garage rock: play tight, drink on stage, and banter with the audience.