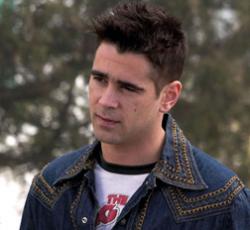 A Home at the End of the World

"I may not be the most adept."

For suburban 1970s Ohio teen Jonathan (Harris Allan), an unconventional boy named Bobby (Erik Smith) is a connection to a larger world. For Bobby, Jonathan’s family — especially momma Alice (Sissy Spacek) — represents a kind of stability that he’s never known: by the time he's orphaned at 16, he has long since become an integral part of that household.

Thus is the setup of A Home at the End of the World, based on a 1990 novel by the gifted Michael Cunningham, who obviously enjoyed his residuals from The Hours so much that he decided to do a hatchet-job film adaptation of an earlier work. As tender and well-meaning and well-acted as it is, the result is far from being a great cinematic achievement.

Most of the action takes place after Bobby and Jonathan have reconnected as young adults — played by lusty leprechaun Colin Farrell and impressive Dallas Roberts, respectively — and Bobby has yet again joined Jonathan's household. This time it's in a NYC apartment Jonathan shares with his free-spirited bohemian fag-hag Clare (fantastic Robin Wright Penn); she's in love with Jonathan, who's still in love with Bobby (can you blame him?) and moving restlessly through a succession of one-night stands.

After Jonathan’s dad dies, the three misfits wind up purchasing a modest country home together, and (corny as it all becomes) the film actually has a lot to say about notions of family and loyalty. I haven’t read the book, but the story feels like a novel and would probably benefit from the interior monologues prose can provide. In this movie World, events that take on the magnitude of life history feel rushed, or, more accurately, half-baked.

There are good things, though. Like the soundtrack, with apt period tracks by Laura Nyro, Leonard Cohen, and The Band. And Duncan Sheik (yes, the “I am barely breathin’” guy, who for some reason is big with the mainstreamish gays) provides an understated score to enhance the polished production values.

Speaking of, accomplished theater director Michael Mayer helms his first film with intimacy and grace, always keeping the story’s social sweep in view, and prompting first-rate performances from most of his actors: I can honestly see Oscars® in the cards for Roberts, Wright Penn, and the incredible Spacek. But it’s ever-versatile Farrell who’ll get the most attention, and for good reason: he embodies Bobby's guileless charm impeccably, evincing more vulnerability and ingenuousness than I’ve ever seen him show onscreen.

But he doesn’t show everything. Rumor has it that a full-frontal Colin-dong shot was snipped (ouch) from the final cut after it proved distracting (!) to test audiences. All the more reason to wait for the DVD, and to start getting your thumb in shape for that pause button now.