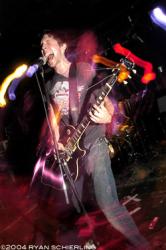 The Stereo Future, Big Collapse, No Means Yes, and Irene

With the whirlwind that is our imaginary lives — hoping for a new President, working our day jobs, and posting CD reviews, oh my! — it's refreshing to show up on a weeknight at Graceland to see four unknown {to us} bands. It's the adventure of it all, really, or as Char's imaginary date du noir said…

"It's like a piñata. You beat the shit out of it and you just never know what's gonna come out."

This proved a wise epithet for the evening, which featured a halfway local lineup of bands: Irene (from Houston), No Means Yes (newly-moved to Seattle), Big Collapse (from L.A.), and the Stereo Future (from Seattle).

And speaking of hot, can I just mention that Graceland was a fucking oven?

Sweet Jesus, was it hot!

Have you all noticed that Graceland has been booking quite the ball of banger line-ups lately? This evening's openers, Irene was no exception, playing loud, metal-like rock. And — all three members are brothers! I wonder if they borrowed their parent's minivan for the roadtrip in from Texas?

Irene sounded like cooking a pancake at too hot a temperature, so that the outside gets crusty, dark, and unpalatable, while the inside is underdone, un-gelled. To continue the metaphor, Irene had raw intermitted moments of power when their combined elements sizzled, but overall their recipe didn't suit my current musical diet.

They put the butt back into buttrock. I haven't heard music this aggressive since Riki Rachman was working for MTV. They sound kinda like Andrew W.K.

Some songs really highlighted the bass player's obvious jazz background, and in other songs, the bass line was drown out by the deafening, driving guitar.

I lack the vocabulary to describe this one. Well, other than to compare them to a pancake.

Mmmm, pancakes. I'm sorry I missed them. I arrived just in time for No Means Yes, a punk-pop, slightly sinister four-piece band with a female keyboard player. She didn't fit in with the band, either. The keyboards were kinda incongruous with the rest of the band's sound. Although they got over-powered for most of the set, the keystrokes sounded nice when you could hear them. The lead singer said she was new (and cute). I bet she was brought on to be the designated driver.

And even though no one else agrees with me, I thought they had a bit of a Dead Milkmen sound {minus the humorous lyrics about lizards and banana peels}. And I gotta say, I'm not really comfortable with their name. 'Cause NoMeansNo.

My favorite part was when the guitar player blew fire. Seriously. He drank something, or put it in his mouth, and then lit a lighter and blew AND THEN THERE WAS FIRE. It rocked. Welcome to our fair city, boys (and girl).

Following No Means Yes came the Big Collapse, who are from LA. We found this frustrating, as we were trying to discover some new local bands. But anyhow… there they were. They had a decidedly earnest classic rock sound, especially in the vocals. Think Living Color only all white, At the Drive-In only less interesting, the Senate Arcade minus the math rock, or the Black Crowes minus the heroin.

The Black Crowes did heroin?

Oh, I don't know. Chris Robinson at least looks like he did/does. I don't know, empty shows for out-of-town bands make me sad. They make me wish Graceland had blenders so I could have a piña colada. I was very sober.

I had a pitcher of cold beer to go with my hot date!

After an evening of decidedly metallic ruckus, Seattle's the Stereo Future initially sounded like a freakin' ray of sunshine, a four-piece with lighthearted guitars and fine indie-pop sensibilities.

A little history: we decided to attend this show based on the demo the Stereo Future sent our way. The EP stood out as intricate without being noodly. While the recording quality was shoddy, we could hear potential, a diamond in the rough, if you will. A little work, and we figured it could be the next-big-thing, like a Built to Spill meets Blonde Redhead dynamo of a band.

Unfortunately, the band's set was plagued with technical difficulties and pitch issues. It seems that everything melted down — their accompanying laptop crashed, their vocals faltered, and at one point, the band claimed their laptop was "out of tune," causing one smartass show attendee to heckle, "You can't tune a laptop." That's funny.

I blame the heat. Did I mention how hot is was in Graceland?

Hot enough to untune a laptop.

Indeed. In case the Stereo Future are wondering if they're worth investing in studio time, the answer is, certainly. I've heard rumors that a new release is forthcoming. I hope to hear it, and perhaps see them again. Like, maybe October. You know, when things cool down a bit.

In the meantime, off I go to find a piña colada…