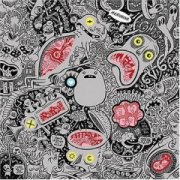 I was outside the Bowery Ballroom, where the Long Winters were headlining the latest tour in support of Putting the Days to Bed, when I ran into Cale Parks from the band Aloha. "Are you here for Menomena???" he asked excitedly. I'd interviewed him recently regarding his solo record for a magazine in Brooklyn, and he seemed excited that someone who liked his own record shared a taste for a band he so obviously adored.

"Yeah," I said. "Well, them and Long Winters. Haven't heard the Menomena full-length yet, but I liked the EP and the last record. I know they've got a new one coming out on Barsuk soon, so I guess the label tacked them onto this tour."

Cale said Aloha played with Menomena at SXSW, and that they were awesome.

Menomena's previous records, both released on Portland label Film Guerrero, include I Am the Fun Blame Monster (2004) and Under an Hour (2006). The latter, composed in conjunction with the the T:BA Arts Festival in Portland, included three instrumental dance pieces; the former was originally self-released, and is currently out of print.

And then Barsuk Records signed them. Another EP, Wet and Rusting, was released late last year, presumably as a little tease and announcement to Friend and Foe, which hit stores this week. Like a stilted lover, Barsuk rebounded from Death Cab's jump to the majors by going out and hooking up with as many bands as possible. Unlike a regrettable one-night stand, waking with Menomena beside you has proven to be more than enough motivation to get out the eggs.

In all honesty, I had arrived at the Bowery that night to see the Long Winters. Menomena was a cursory addition, a fortunate coincidence. I was excited to see them, but only inasmuch as anyone is excited to see a band they've heard and not hated: a welcome alternative to making small talk while waiting for the act you've already seen and enjoyed a dozen times.

Menomena blew the crowd the fuck away.

Menomena specializes in amalgamating traditional elements into unexpected and (somehow) understandable wholes. On Friend and Foe, vocal melodies articulate the foundation to opener "Muscle 'n Flo," however these quickly give way to sharp-fanged guitar distortions. These soon give way themselves to a thick baritone sax nasality.

Most of the tracks follow similar, remarkably excellent suit; however, it's the frighteningly unpredictable "Wet and Rustling" that sets the highest standard for the new year. Indeed, it is the unpredictability of Menomena's sound catapults them above the rest of the pseudo-experimental indie ouvre. Without sacrificing accessibility and "ease" of listening, the trio explores instrumentation and riffage to the edge of the envelope, the whole time forcing the listener to be conscious of it. That night's performance of "Evil Bee," a track I had never heard and did not know the title of, contains a simple bari-sax riff at the end of the song occurring with such precision and rightness that it would simply not leave my head. Two months later, I received the promo and immediately recognized the track.

Such is the infectiousness of an album I can't quite relegate to experimental, because it's more successful than that, and can't simply call "indie," because they're so much better than Clap Your Hands Say Eh. With Friend and Foe, Menomena defies songwriting in favor of composing, defies instrumentation in favor of orchestration, defies pop in favor of art, defies defiance in favor of acceptance. This is an incredible record, one that I cannot recommend highly enough.