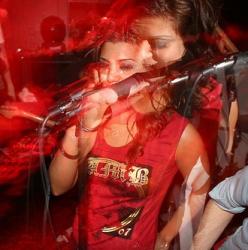 The Catch, the Lashes, and U.S.E. at the Comet

Friday was an amazing night for Seattle music fans, and also an impossibly difficult one; if only there were a way to be absolutely everywhere at once. Blood Brothers at the Showbox, Night Canopy with Cloud Cult at Neumo's, the Stooges in a venue in which they should never be seen, Siberian out in Kirkland… and nearest and dearest to my heart, Grand Archives with the Lights at the Crocodile. Phew. With all of these choices, I was nonetheless ecstatic to be crowded in at the Comet to see the Lashes and the Catch, with their pseudo-secret guest United State of Electronica. Trusting that Imaginary Dana would report back every detail of Mat Brooke's new endeavor, I settled in comfortably for a night many of us have been waiting a whole year for.

Even the first online rumors of this "secret" show set off blog dialogues about every band on the bill. All over Capitol Hill were Ben Lashes' smart and snarky handmade flyers – "If you heard that U.S.E. are playing the Comet this Friday, please don't tell anyone!!" The show opened with a last minute addition from San Francisco, Music for Animals. The band was charming both on and off-stage, though their sound leaned a bit too much toward Sublime-infused cock-rock for my taste. Despite the fact that the room was eager to get to the rest of the bill, the crowd responded with enthusiasm to their set.

After some jumbling of equipment in such tight quarters, the Catch took the stage. Lead singer [and U.S.E. member] Carly Nicklaus has earned comparisons to another charismatic diva, with the Stranger's Trent Moorman declaring her "Seattle's own Beyonce." Stepping up to the mic in four inch heels and tauntingly singing with searing energy, it's apparent she's holding true to her title. Amy Rockwell, on keys, has a sweet sexy voice that shines through on her backing vocals. The once all-girl lineup has transformed over the past year to include the Pale Pacific's Justin Harcus on bass and the Divorce's Garrett Lunceford on drums. Their new songs clearly demonstrate the strength the two new members have brought to the band. For those of us who still [and will always] miss members in the original incarnation, there's nonetheless no denying that Garrett's hard hitting drums give the songs a much dancier feel. The bass solo midway thru whip-smart track "'06: 101" is a uniquely Justin addition.

Jenny Jimenez — the Catch's former bassist who can now be found playing any number of instruments in Night Canopy — appeared mid-set and wrangled her way up to the microphone. The timing couldn't have been more perfect, as it allowed her to join in on "Nothin' But Time," soulfully crooning the refrain, "I really, really miss you." It was an absolutely magic moment.

The Lashes took it up a notch further, turning their monitors out to the crowd before they launched into their first song. Everything good and bad has already been said about this Seattle-gone-major-label band, but this was the perfect setting to see them perform their pure pop music with frantic energy, and unending showmanship from lead singer Ben Lashes. The line between band and crowd blurred as he sang alongside those standing in the front row. To match the track "Nate's Song" (a song penned by bassist Nate Lashes, off of their major label release, Get It) they debuted "Eric's Song." Guitarist Eric Lashes had multiple solos during the set, Ben miming the predictable crowd reaction by kneeling down in front of him in only slightly mocking excitement.

Closing with nothing less than debauchery, Ben emerged from behind the drum kit with two pitchers of beer. Marching thru the crowd and up to the dividing wall between the stage floor and the bar, he refilled glasses before finally showering the crowd with what remained. Suffice it to say not everyone was thrilled, but it certainly was not lacking in entertainment.

Creeping past midnight, the overworked soundman began the task of getting ready for U.S.E. to take the stage. The crowd was already chanting "U! S! E!" and the sold-out venue filled with palpable energy. A multicolored ball shot out color from the corner of the red-lit bar as the band huddled behind a black curtain before finally taking the stage. Launching into their first song, there was roughly a minute of everything U.S.E. is famous for before — BLAMMO! — the power blew and launched the packed Comet into quiet darkness. After not one but two of these mis-starts, Nicklaus smiled into the mic and declared, "Turn off the TV's! No one is watching them!" How true.

Soon enough they began in earnest, minus the colored lights and a fog machine for the sake of keeping the mics and amps on. Two songs in, I abandoned all illusion that I could capture the proceedings. In all honesty, it was the Catch's Lunceford who put his hand on my shoulder and wisely pointed out, "You have to put that camera down and dance." It was an utterly intoxicating show, sweaty and screaming and laughing in absolute joy. Those lucky and brave enough to stand front and center had to brace themselves to keep from becoming one with Noah Star and his dual keyboards.

It's phenomenal to think that this group of musicians can consistently create such love and enthusiasm amongst themselves and all within earshot. A friend visiting from Austin asked just what U.S.E. was, and the best text reply I could give was that it's an insane electronic dance party with the most loving, empowering, D.I.Y. heart. The band's requests for hard-earned drinks was granted by honorary member [and Chop Suey booker] Kris K. Running out of time as last call drew near, trying to choose between a new song and an old favorite. The as of yet unnamed track is currently referenced as "When You Get That Feeling" after the lyrics "What's the reason we party? / Love is the reason / When you get that feelin' / Love is the only reason." The band launched straight from the new material into their closing song. Sadly, there wasn't time to grant the crowd's requests for ten more, not two. By the end, the band was surrounded by friends, family, and near members all dancing amongst them. Any hopes of taking photos descended into crossed fingers and blindly pressed shutters; the floor shook so much that even standing still you'd nonetheless be moved about.

Walking home that night I was exhausted and bedraggled, covered in glitter, ears ringing, but most of all completely blissed out on all the "Emerald City" goodness.