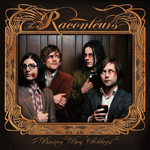 Speaking as someone who has seen Matthew Sweet live four times, I can understand why many people might miss him (yes, I know he's still around, but as a shell of his former rock and roll self). For those of you needing to fill this Matthew Sweet-shaped hole, fear not, the Raconteurs are here to help you. Not to belittle dear ol' Mr. Sweet (whom I have seen finish off what seemed to be a dozen bottles of beer during a show with no ill effects), it takes more than one alternative rockers to take of the slack, here being Jack White (yes, that Jack White) and Brendon Benson (along with members of the Greenhornes). Broken Boy Soldiers is a solid rock album that picks up the mantle of power-pop descending from Elvis Costello & the Attractions, Joe Jackson and of course, a certain Mr. Sweet.

Many people might wonder why does Jack White want to make, you know, normal rock music. That I can't venture to guess, however, the Raconteurs seem to know how to rock quite effectively, albeit in a very straightforward sort of way. The opener, "Steady, As She Goes", beyond being a bit of a linguistic trick, starts with a snarly (and catchy) bass rumble that builds into some crackling guitars and Jack White's vocals. Its probably the most complex song on the album, but the disc really isn't about complexity, instead its about fuzzing out the guitars as they head into the chorus, and the Raconteurs have that in spades. "Hands" lyrically sounds like it could be a Sweet song with lines such as Girl, you got those hands that heel/help me get in touch with what I feel. It blends into a Beatle-esque vocal harmony that carries into the guitar clever, stripped down bridge that builds towards climax at the end of the song. This Beatles sound is expanded on "Intimate Secretary", a song dominated by John & Paul style vocal harmony and some rather inane lyrics like I have a rabbit that likes to hop/I have a girl and she likes to shop, and yes, count me as someone who never expected to hear such lyrics come from Jack White's lips ever.

There are a number of things that I learned while listening to Broken Boy Soldiers that surprised me; namely, I had no idea that Jack White seems to so desperately long to be, well, Ann Wilson. The title track is quite catchy, but sounds like it would fit in quite well within the oeuvre of late 1970's Heart, right down to Jack White's vocals. Surprisingly enough, this sounds works well for the Raconteurs, diving them deep into the realm of arena rock. Ballads like "Together" have more of a Neil Young/Harvest Moon feel to them (with a little less folksiness). Benson's vocals on "Together" add depth that Jack White's higher voice misses, but oddly the backing vocals White adds mesh beautifully. "Yellow Sun" is a bright spot (no pun intended, honestly), with a charming playfulness unlike some of the overly serious tracks like "Call It a Day" and "Store Bought Bones" that feel a bit like filler. The closer, "Blue Veins" finds Jack White turning in a lost White Stripes song, a deep bluesy song that simmers about the getting someone under your skin. Jack White delivers his pattern have spoken, half wailed vocals as the guitars and piano march along in the most dirty and organic approach on the whole album.

Broken Boy Soldiers is what it is: a side project. The songs are pleasant enough and none of them are bad, but also none of them set them apart. However, if anything can be said of the Raconteurs, they breathe new life into pop-rock that had been fading away since Matthew Sweet lost his way. Maybe you can't blame Jack White for wanting to make some straight-fo rward rock without the pressure of keeping it under the White Stripes banner. You just feel that maybe they played Broken Boy Soldiers a little bit too much by the rules.