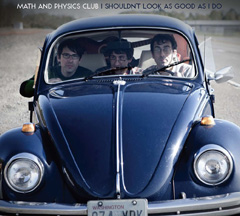 I Shouldn't Look As Good As I Do

{Join us at the Math & Physics Club album release show on Saturday, June 12 at the Crocodile with Aqueduct and Skeletons with Flesh on Them!}

Ethan, Charles, and James started playing together in Seattle in 2004, after the latter two had grown up in and inspired by the Olympia scene, tumbling about the spreading evergreen branches and primitivist punk pine cones from the shakin’ Beat Happening family tree, and its simple, playful underground pop aesthetic. M&PC also shared love for bands like Seattle’s power pop princes The Posies and UK positive energy-priests The Housemartins. This led to kinship with The Lucksmiths from Australia, and KEXP DJ John Richards getting excited about them, and a signing to the irrepressible Matinee label. Adding drummer Kevin and violinist Saundrah to their sound had helped them make a candy store of EPs filled with songs shimmering autumn sunshine, effervescent anthems with a hint of sadness.

After four years, Math and Physics Club release its long-awaited latest album, I Shouldn’t Look As Good As I Do. The band has wondered if people are just polite in Seattle about bands, but a few listens of the short ten tracks on their second full length unveils a band that has absorbed their influences and come up with songs as huggable as anything Camera Obscura has ever recorded. If you doubt the strength of the rating with this review, bear in mind that I am far from an expert in “twee.” That genre term means nothing to me here; these songs pulse and bounce and zip along as magically as if I hadn’t grown up with The People Who Grinned Themselves To Death and Hatful of Hollow. I will be playing all ten tracks here over and over as much as I ever listened to Jonathan Sings! Check back with me in six months and my iPod “Most Played” list will prove it.

“Jimmy Had A Polaroid” opens the album in a handclap-worthy song about cameras, parks, stacks of 45s, and a girl moving away, as compelling as a free afternoon with the person you adore most together “until we fell to the ground / and watched the clouds spin around.” The excuse of their absence is just “something that we say.” “We Make A Pair” is a lilting ode to sharing tea and coffee with a short haired partner and to getting “into trouble easily … and stick together to the bitter end.” On tracks like “Trying To Say I Love You” the pining could be as real as an early Beatles tune, as the gentle shimmy may be from any pure pop gem created in Scotland or Southern California or New Zealand at any time of fecund creative growth.

These first three songs are all brilliant little singles about love and togetherness and love and loss. Then things start to get more lyrically detailed and urgent, as the Aussie C&W shaggy dog tale of “Everybody Loves A Showtune” comes along as wry as anything the Triffids, or a less grim book-end to “Frankly, Mr. Shankly.” While “I’ll Tell You Anything” is perfectly timeless and caffeine-inspired early evening come on, the extremely catchy “Love Or Loneliness” takes a darker approach about attraction. “Will You Still Love Me?” asks about the decay of body and relationship and having to “get our kicks from small blue pills.”

For me, the album ends on its two strongest anthems, the musically loping, and lyrically terse poseur-challenge “The Internationale” (“The parties where you go to see and be seen … but what do they really think? I don’t care who you just kissed and that you’re always on the guest list”). Critical but concerned, and not too over the top nasty. The penultimate track “I’ve Been That Boy” may be the band’s finest slow song, detailing a brittle, unrequited affair from a long time ago. It is so open and mature it could have been recorded by any great band, any time. “You never looked at me like that.” Who hasn’t been there?

Math and Physics Party brings it all back for a conscious self-mockery, “We’re So DIY,” which might have been smarmy if the nine slices of the simple life hadn’t been delivered so cleanly, crisply, without airs. It’s almost utopian, making me want to “talk trash with Tullycraft,” just like them. Where’s my Casio again?