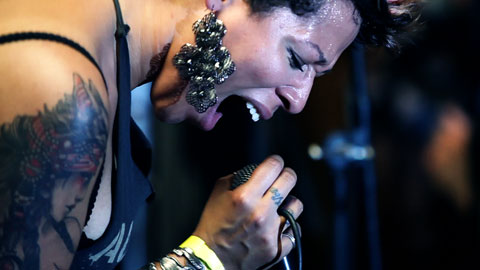 Amplified Seattle is a compliment to Lynn Shelton’s forthcoming $5 Cover: Seattle MTV web series and is best viewed as an introduction to Seattle music. It is made up of fourteen vignettes (thirteen different artists and one on Shelton) cramped into just under an hour.

There are some great, revealing moments like the profile of the queer hip hop duo THEESatisfaction, which interviews both ladies and their parents (and who couldn’t be prouder of their daughters) and Harvey Danger’s Sean Nelson thinking out loud about the nature of one-hit wonders and what it means for him. Mostly, though, the profiles are too short to leave much of a memory behind. On another note, Tea Cozies have been playing with a new drummer for several months now so the gender-dynamic that’s commented on no longer applies.

Director John Jeffcoat had a thankless task of funneling a gazillion brilliant artists to profile down to thirteen and does represent a diverse sampling of the great music being played every night in Seattle, including a handful whose music I’m almost entirely unfamiliar with. You’re not likely to learn a lot about different Seattle musicians here, but you’ll likely be inspired to seek out some new favorites and learn more (if you’re unfamiliar, might I suggest Tea Cozies and Champagne Champagne?).

{Amplified Seattle plays tonight, Wednesday, May 26 at 9:15pm at the Neptune Theater.}