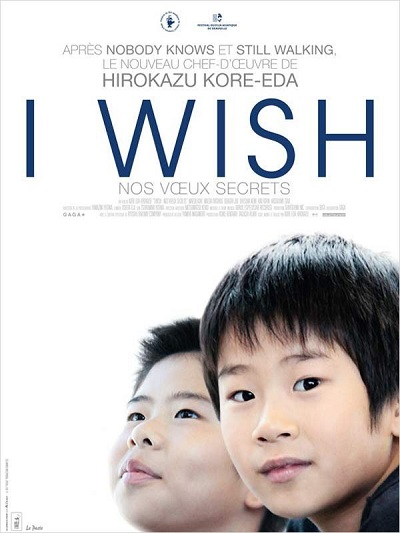 {I Wish opened at the Varsity Landmark Theatre on Friday 6/22, and sceens through this Thursday, 6/28}

While it may feel a smidge longish I Wish is a film that most people will agree on as a delightfully pleasant watch. Hirokazu Koreeda the director of the fabulous film Still Walking delivered his latest fine cinematic experience to SIFF this year. Now just a couple of weeks later you can skip the long lines and rigid show times to catch I Wish at the Varsity theater. But don't wait – Thursday is the last day you'll be able to catch this one.

Koichi and Ryunosuke are brothers separated from each other by their parent's divorce. One lives with the father, an aspiring but not especially successful musician and the other with their mom. They have very different but connected lives that they've become adjusted too. Listening to their phone calls one gets the distinct sense that they'd purposefully chosen different parents to live with as part of a plan to get them back together. If there was such a plan it's clearly going nowhere. At least until one hits upon a belief that they'll be magically granted a wish if they witness two new bullet trains lines passing each other at top speed. It's the sort of idea only a group of kids could create and then take as fact, yet plan so meticulously towards achieving the goal. A scheme is hatched involving friends, grandparents and probably some other folks I'm forgetting. It's worth mentioning that this predicting train crossing point is quite a ways away from either of their hometowns.

I Wish is reminiscent of Still Walking in its multi-generational focus. The parents themselves, the children and their community (including a memorable homeroom teacher), and the grandparents. While the kids build their plan to sneak off to a neighboring village overnight the elders work their own undertaking to break back into the sweets market with a cake celebrating the inaugural run of the same train. Things don't so much build to a climax as take the viewer along for a meandering ride. This may be a kinder, gentler Japan than the reality where kids can sneak out of town and (a) everything is fine and (b) no one worries too much about them. But I'd have to say the best parts come in the on the road segments as the kid's interact with the folks they meet along the way.

The performances the children provide for Koreeda are remarkably natural, which is why I think the film works as well as it does. There is a recognizable story arc, and complexity below the surface as the two brothers react a bit differently to the "what if this works?" question. But the slice of life aspect mixing compelling family drama and way too young to be on the road road movie creates an oddly compelling result. A very beautiful simple (on the surface) and fun film. Highly recommend.