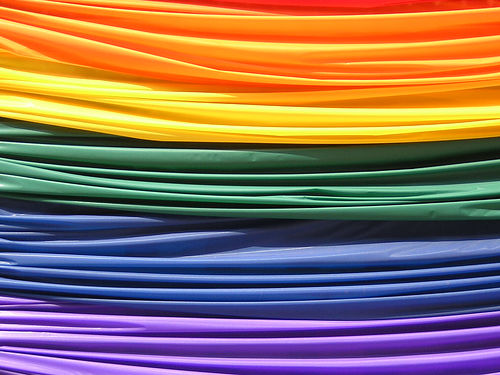 As members, supporters, and allies of the LGBTQ community, many of us will be out and about in our lovely city this weekend celebrating the few days of annual fanfare known as Pride Weekend. To casual passerby, Pride Weekend may look simply like a love-riot — full of parties, debauchery, intoxication, and the predictable "morning after" vibe that's best observed on the streets of Capitol Hill: shredded rainbow accoutrement, balloon fragments, and a whole lotta feel-good glitter decorating the streets in the dawn hours of Sunday morning, before the regroup takes place at the annual Pride Parade through the downtown streets of our fair city. But Pride has much more to it than that — so before we run down a mini-schedule of all the rad doings that are waiting to be had over the course of today and tomorrow, we thought it best to take a moment to remind you (and perhaps educate you) about what all the fun is about in the first place.

Back in 1969, it was quite literally illegal to be out and gay — especially so in New York City, where the beginnings of what we now know as a nationwide Pride celebration got their start at a bar in New York City called the Stonewall Inn. It was routine behavior back then for police to raid and shut down openly gay establishments as enforcement of laws banning homosexuality in public. {Seriously!} But on a fateful night back in June of that year, a handful of folks at that popular gay bar in Greenwich Village decided that they'd had enough. Not only did they fight back against that night's raid, but returned the next night over a thousand strong, demonstrating at Stonewall, and at other locations across the city over the next several days. Some of the first openly gay-labeled advocacy groups were borne out of these riots and demonstrations — within two years, one had started in nearly every major city in the United States — and the following year after Stonewall, on the same weekend, the nation's first-ever Pride parades took place in Los Angeles, San Francisco, Chicago, and of course, New York City.

So, while you're out there raising a toast and shaking your gorgeous LGBTQ /-friendly booty on many a dance floor around town this weekend, take a minute to remember what all the fun is for in the first place! Here's a few official ways and means to help you get your celebration on, with an incredible community that's forty-plus years strong in the making:

Saturday: the RED MEN'S PARTY {Neumos} and the RED WOMEN'S PARTY {The Baltic Room} will be both kicking off at 9pm on Saturday, with DJs performing into the wee hours of Sunday morning. A few of the stars from past seasons of Ru Paul's Drag Race — most notably, Latrice Royale herself — will be performing at R Place, and a big ol' chunk of Broadway will be cordoned off for Captiol Hill Pride 2012. Parties will be starting in the early afternoon at Purr, the Wild Rose, Pony, Julia's, and practically every other venue you can think of.

Sunday: The official Seattle Pride Parade starts the day off at 11a {Downtown}, and slides right into a day full of activities at PrideFest at Seattle Center, with DJs and bands taking over from noon straight through 8pm. You can check out the whole lineup here, but we're especially partial to the Bent vs. Lick! showdown at 7pm! Also, KEXP has a party starting just after the parade as well, with DJs El Toro, Mel, Larry Rose, and Riz {!!} just outside the 5 Point at 5th & Denny — and all the usual suspects listed above {along with the ChaCha and the Funhouse} will have Sunday festivities going strong as well.

Megan Seling put together a super comprehensive list of what's what over at the Stranger's site here that we highly recommend you reference for maximum celebration planning. Party safe, everyone! Happy Pride!