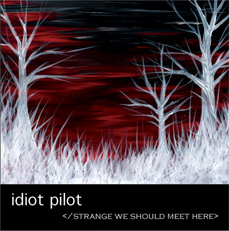 Strange We Should Meet Here

Idiot Pilot is about to become a household name. Soon all the cool kids are going to start asking you if you've heard of them, and if you haven't, you might never have sex again. So, in the interest of saving you from the path of unequivocal loneliness and shame, I have prepared the following list of useful factoids surrounding the band's major label debut, </Strange We Should Meet Here>:

This list is in no way intended to be comprehensive as the virtues of Idiot Pilot are boundless, but if you memorize the above facts, you should be able to fake your way through the inevitable dinnertime conversations with the family. It's probably best, however, for you to just accept Idiot Pilot into your heart, as True Faith is instantly recognizable.